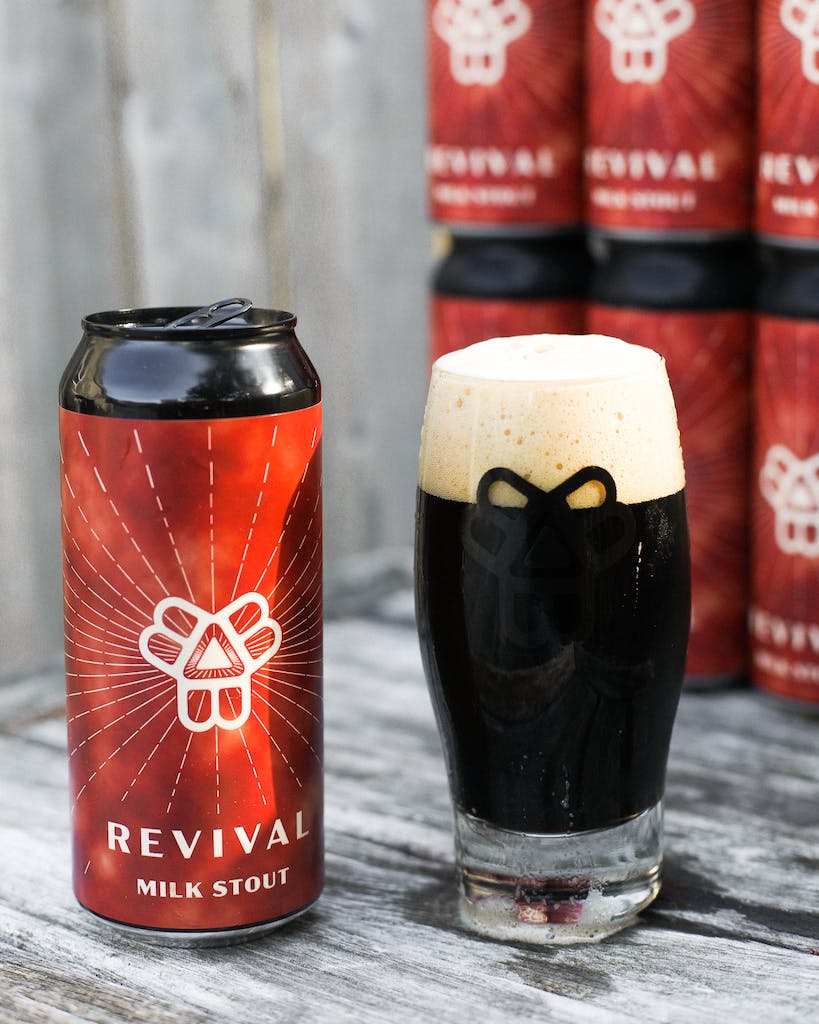 With Labor Day come and gone, cooler evenings, and all the kiddos back in school, it’s time to start taking this whole “end of summer” thing seriously. Life can’t be all paddle boarding, all the time. I think we can all agree on this.

As luck would have it, we have just the thing to help you embrace this seasonal shift. You may have even had it in our tasting room before, but today we release it in four packs to go for the first time ever: Revival, a milk stout, in cans.

We can’t talk about this beer without introducing you to Geoff Ballou: Bissell Brothers production guru, Revival brewer, and all around champion for milk stouts the world over. His passion for milk stouts and genuine desire to spread the good word of this creamy, roasty, but drinkable style of beer are truly inspiring. We spoke to him about his beer and it’s move from our pilot system to the 20 BBL system. Read more below!

What got you into milk stouts?

The first milk stout that really jumped out at me was Six Grain from Austin Street. Six Grain impressed me because it is a well balanced, full bodied stout, yet low enough ABV to drink a couple – which is what happened. Then I started diving into the style more and buying more milk stouts and really seeking them out which, yea, can be challenging because it’s not a hugely popular style.

For you it’s like a year round stout option?

Yes, but they can be elusive so I wanted to make my own. I wanted to make a stout light enough to be accessible, but rich enough to please stout drinkers. Revival delivers big notes of chocolate, caramel roast, and silky velvet on the tongue. The lactose adds to the body, and creamy mouthfeel.

What are some milk stouts that you’ve found on your travels?

I think Treehouse does a great job with their milk stouts. That’s What She Said is 5.5%, where we were targeting- that stands out. All That Is and All That Will Ever Be, another Treehouse offering- incredible milk stout. I wish they made it more. They’re doing great things down there, and hopefully our beer tastes as good as theirs. Definitely look up to those guys, and they’re out there doing it too, they’re making milk stouts, which,I love.

This is your first beer on the big scale system, are you excited?

Very excited! It started over three years ago. The first pilot batch was never served- it was kind of a muddled mess of flavors. I learned there was potential for a milk stout, but in order for it to be good I would need some help from Patty Mac. Patty is one of our head brewers and a wizard on the pilot kit. We worked on another recipe, and really tried to accentuate some of those notes that got lost in the first go-round.

The Revival was our new and improved milk stout, and poured on nitro in our taproom in time for Thanksgiving 2017. We brewed another pilot batch about a year later, the grain bill changed a little bit for that second beer, and we poured on CO2 instead of nitro. The third round on the pilot was summer of 2019, we blended the best elements of the first two and everyone was pretty stoked on it. Really very little change scaling it for the production system, just wanted to make more. Hopefully it will hang around a little longer and more people can enjoy it, and maybe more people get turned on to milk stouts by it, who knows.

Who is this beer for?

I think a lot of folks that maybe are tiptoeing into stouts will enjoy it, or maybe don’t drink stouts often might reach for it. If you like stouts, Revival will not disappoint. I hope summer goes on forever, but stout season came early this year.

We tried to go for something simple, done right. A mellow stout with milk chocolate and caramel notes, nice roast, smooth mouthfeel. We have a couple casks that will get different treatments as well, like a vanilla bean cask and a coffee one. We can kind of play around with that. It’s fun for us to see something that we’ve been working on off and on for a couple of years make it to the production scale. We try to explore some new territory, which is something that Bissell Brothers does, and we are proud to carry that torch.

Revival is on draft in our tasting room and for sale in four packs to go! Come grab it. There’s no better way to usher in the first few cooler nights of early fall than with a roasty, refreshing milk stout. Revival is just the thing.

Account Diaries: One For The Locals
Worth A Visit, Worth A Lifetime