What is Dry Hopping? 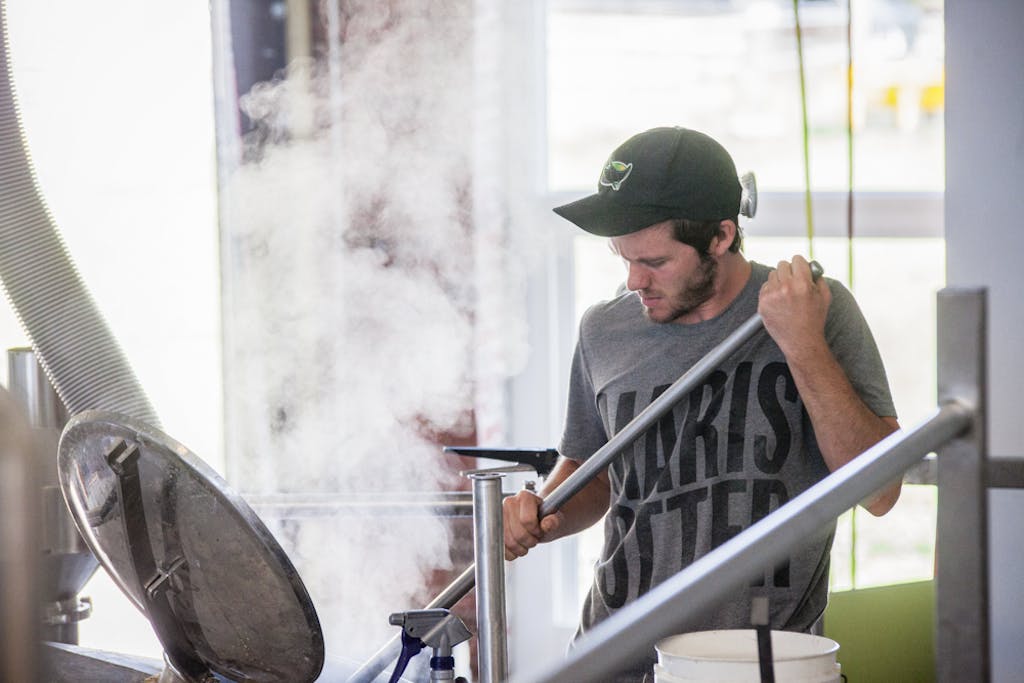 Anyone who’s tried our beer can rest in the Absolute Knowledge of one thing: we love a good hop. We love hops so much that, for most of our beers, we add them at numerous stages of the brewing process. In conversations about our beers, we get a lot of questions: what makes them hazy? Where does the fruity flavor come from? Why are they less bitter than other IPAs? The answer often comes down to dry hopping.

Let’s start where we’ve been told is a very good place to start: at the very beginning. During the brewing process, once the wort has been extracted from the grain in the mashtun, it moves into the kettle for the boil. This is when the first batch of hops are added to most beers. For example, when brewing Substance, hops are added at “first wort” or, the moment that the wort starts filling the kettle. These hops obviously stay for the duration of the boil, about 70 minutes. Hops added at this stage of the process add bitterness, which is an important component of all beers, but especially IPAs. In West Coast IPAS, the majority of the hops are added early in the boil, which imparts the intense bitterness that is the hallmark of the style.

There are plenty of opportunities to add more hops during a typical boil. Hops added 30-60 minutes out are for bitterness, 15-30 add flavor, and 15-5 add aroma. And that’s just the boil! But basically, the less time the hops spend in the boil, the more nuanced character you can extract from them. The floral or citrusy aroma of a hop just can’t survive a full 70 minutes in the kettle, so it might be added at the very end of the boil for five minutes to get those sweet, sweet aromatics.

After the boil, beer moves from the kettle, through the heat exchange and into a fermentor, which is where the *~*magic of dry hopping*~* can commence. For our hoppy beers, we generally add hops right into the fermenter around the seven day mark. For double dry hopped beers like Reciprocal, we add hops to the fermentor on days four and five for a one-two punch of tropical, floral goodness.

It is this process that gives our beers the hazy look that New England style IPAs are known for. The reaction of our yeast with the late addition hops results in something called “turbidity”, which is basically the degree to which a beer loses its transparency due to particles being suspended in the brew.

So now, if anyone asks you why the beer they’re drinking tastes like grapefruits and looks like orange juice, just tell them: it’s all about that dry hop, baby.