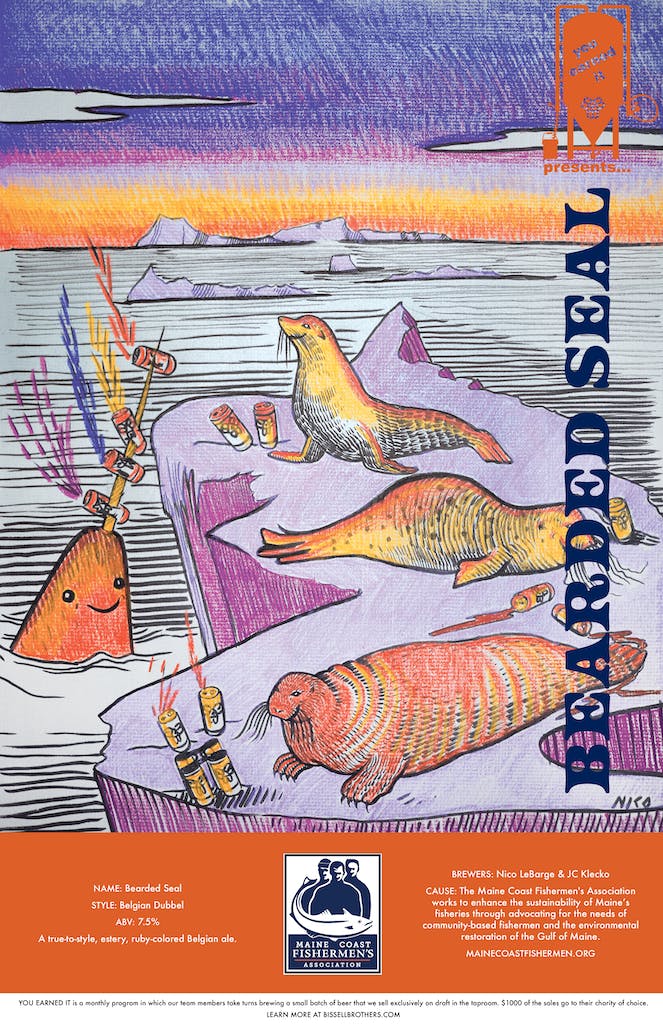 You Earned It Session 11 – Belgian Dubbel

Never ones to shy away from traditional styles with high ABVs, our latest You Earned It offering is sure to make you want to curl up next to a fire with a good book and a couple hours to kill. Today we are releasing Bearded Seal, a Belgian Dubbel brewed by two of Bissell’s biggest fans of seals, Nico and JC. Unfortunately we don’t have a fireplace in our tasting room (which is the only place it is available) and we try to keep open flames in the brewery to a minimum. But it is warm and cozy and full of friendly faces and, we like to think, worth a visit. Their charity of choice, Maine Coast Fisherman’s Alliance, will receive $1000.00.

We’d also like to send our deepest condolences to the families of Joe Nickerson, chairman of the Maine Coast Fisherman’s Alliance, and his crew Chris Pinkham, who were tragically lost at sea two weeks ago. Please know that we are raising our glasses to you and anyone touched by this tragic loss.

Bearded Seal is pouring in our Portland tasting room starting today until it’s gone. Come on down and try some!

Nico: After picking the charity that we wanted to donate to we wanted to name the beer after a Belgian sea creature. Since the beer is a Belgian dubbel it made complete sense to name it the bearded seal. These seals have crazy whiskers and to me would be craft beer drinkers if they had the chance.

Jc and I wanted to brew a beer together that encompasses both of our style interests! Malt forward Belgian beer with high alcohol content!

This summer we were able to attend the Maine Coast Fishermen’s Association event in Harpswell and we had such a great time there that we wanted to give back to their cause. My sister works in fisheries and wetland sustainability as well as dealing with salmon and local fisheries on the west coast and I wanted to give back to a cause that is close to my heart! I think it is really important to support the fishermen of Maine as well as the scientists who take care to protect the gulf of Maine’s ecosystem, while making sure the fishermen can thrive!!

Adding in all the syrup and sugar needed in this beer.

On a cold night inside by a fireplace!!

As veterans of the You Earned It program, what has been the best part of brewing a pilot beer? Any ideas for next time?

It’s always fun to brew a new style of beer and see what differences that style brings to the recipe! New new NEW kinds of beers!!

YEI:2020 Is starting off just as last year ended; with a slightly less well known style of continental european origin. While December was a Dark German Lager, this month is a Dark Belgian Ale. Also known as the Belgian Dubbel or as I like to refer to it: The middle child of the trappist beers. Dubbels are one of 3 main styles often made by the Trappist Monks of Belgium(think Westmalle, Chimay, Rochefort). It is dark brown to ruby in color with a complex flavor profile despite being a very simple beer. It consists of a base of pilsner and munich with a touch of Special B and Caramunich for depth and color. The rest is made up of dark belgian candi sugar(in our case about 10%). These malt/sugar flavors meld perfectly with the yeast driven esters and phenols that come from using a belgian strain. Add just enough hops to even out the sweetness of the malts and you’ve got a very complex tasting beer with notes of figs, plum, banana and spice. This is a great beer to warm up on a cold winter night and pairs well with almost any meal.