You Earned It: Session Eight 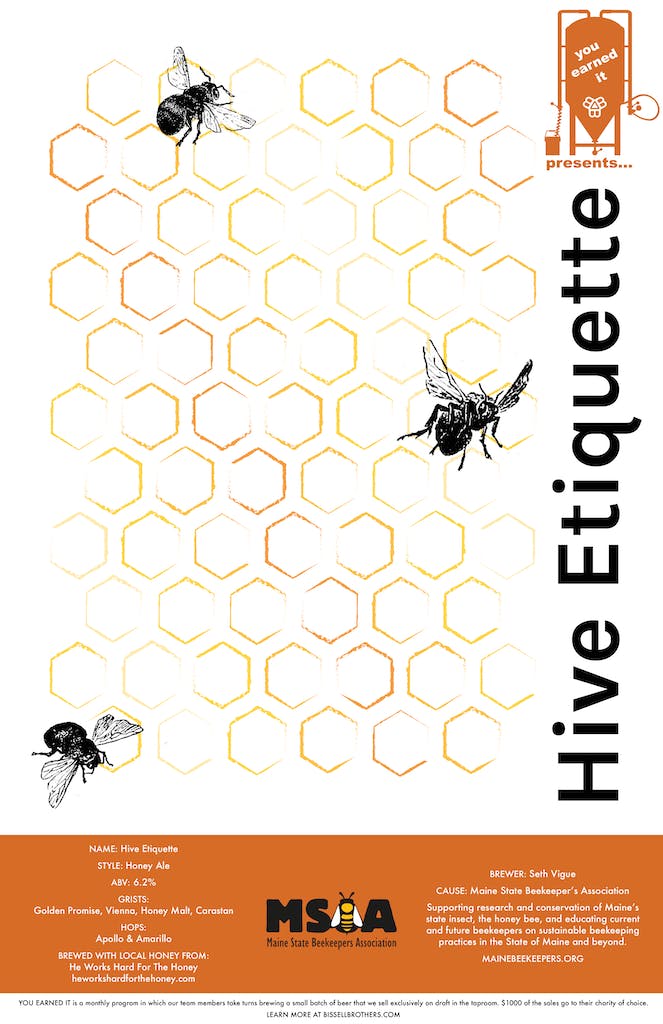 Through the brilliant machinations of one of our first employees and oldest homies, we are finally able to add a fourth “bee” to our name. Today for the eighth session of our You Earned It series, we happily release Hive Etiquette; a delicious honey lager brewed with local Maine honey, made by the hardest working bees in the country. Dare I say, we are all buzzing about it.

They say you shouldn’t turn your hobbies into your career because it’ll take all the fun out of your leisure activities, but luckily that advice never reached the ears of Seth Vigue. Though he was one of our very first hires and has been brewing for us for six years, Viggy is a consummate homebrewer at heart and is always tinkering with new ideas, ingredients, and recipes. His deep love of Genesee Cream Ale coupled with some heartfelt persistence gave way to Kickflip, a deliciously light cream ale to call our very own. All of this is to say: when Viggy has an idea, he runs with it.

After securing a fresh batch of Deering Dark Fall ‘19 from his friends at He Works Hard For The Honey, an urban beekeeping venture right here in Portland, he got to work on the brew. A honey lager should be light but also take on the characteristics of the honey itself, without overwhelming the other more nuanced characteristics of the lager. It’s a juggling act that we’re happy to say no balls were dropped during.

In the spirit of the beer itself and in honor of the thousands of bee-hours that went into making the key ingredient, Viggy chose the Maine State Beekeepers Association as his charity. Honeybees are the most important pollinator for food crops worldwide, so the fact that populations have been dwindling since 2006 due to Colony Collapse and a number of environmental factors has made the situation rather dire. The Maine Beekeeping Association is dedicated to supporting research and conservation of the Maine state insect, the honeybee, and educating current and future beekeepers on sustainable beekeeping practices in the state of Maine and beyond.

Come down and grab a pint of this delicious nectar while you can, and help save the bees!

Hive Etiquette is a 6.2% abv honey ale brewed with local Portland Maine honey. The idea behind this beer was to make a sweet mid level abv beer that was the golden color of honey and that tasted as close to the flavor of honey as we could possibly make it. Golden Promise, Vienna, Honey malt, and a touch of carastan for color round out this golden hued malt bill. The honey was added 3 different times in the brewing process to hopefully ensure that it comes out in the flavor of the beer. A very small amount of Apollo hops were used for bittering, and some Cascade and Amarillo hops were used in the whirlpool to bring out a sweet orange flavor that is sometimes associated with honey. This beer was fermented with our house ale yeast strain because that’s what we do best!

Wet Hop Lager: Taste The Freshness
What is Dry Hopping?