YOU EARNED IT: SESSION 6 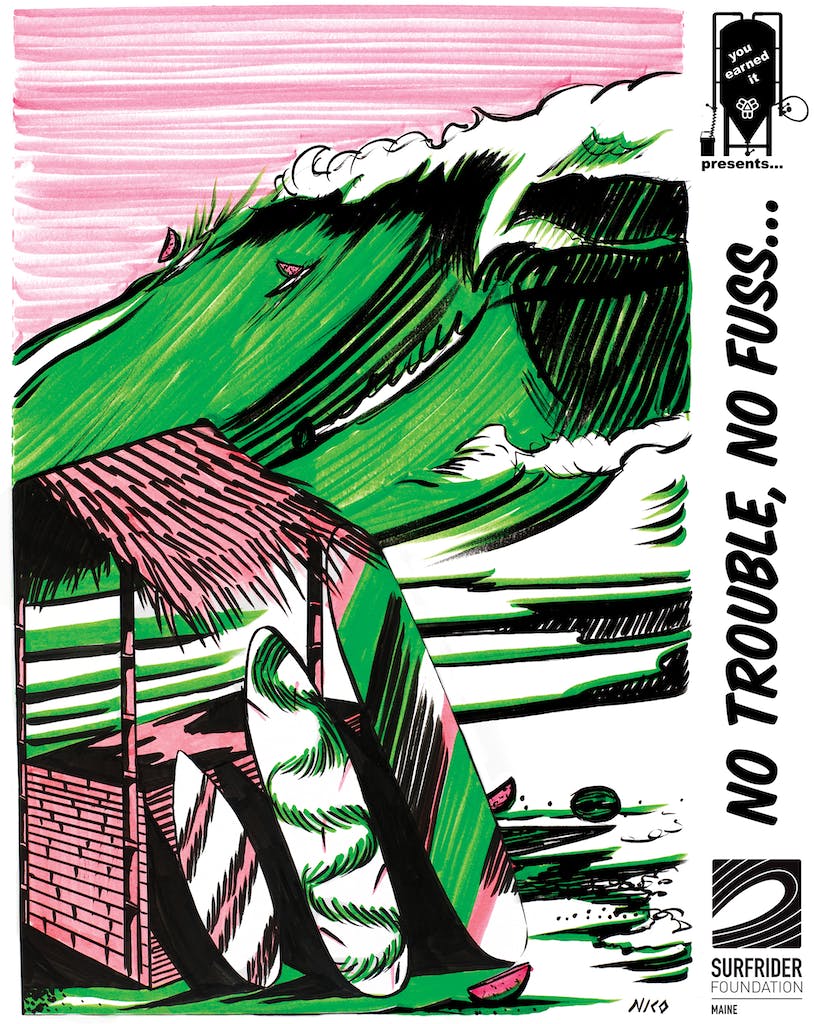 As another summer begins to sail off into the sunset of it’s short, sweet life, it’s natural to try to find ways to hold onto it. Instead of screaming “SUMMER DON’T GO” over and over into the indifferent ocean waves as Summer heads toward a darkening horizon (which, who knows, we might do anyway), why not join us for a little No Trouble, No Fuss…, the latest small batch beer from our You Earned It series? Doesn’t that sound nice? This classic Berliner Weiss, a style known for it’s low ABV, high carb, and refreshing tartness, also features a very. Special. Surprise. Instead of the flavored syrups that are often added to traditional drafts, we opted to “dry hop” the brew with 100 lbs of fresh watermelon, adding a refreshing twist to this otherwise sour beer. The charity of choice this month is the Surfrider Foundation, which strives to protect the world’s oceans, waves, and beaches through activism and community involvement.

You’ve both spent a good chunk of your lives in the NYC area! Which would you rather give up forever: New York bagels, or New York pizza?

James: NY Bagels if I must choose.

Nico: I love nyc pizza. So I would have to say goodbye to bagels.

If you could live anywhere in the world, where would it be?

James: I’m enjoying where I’m at … but maybe a house on the ocean would be cool

Nico: Maine! But if I had to live somewhere else I would say Copenhagen or Leipzig Germany. I have been to both of those places and love the mix of city life with the outdoors and both places are entrenched in artistic culture.

What was your favorite movie as a child?

Nico: No joke I have always been obsessed with “Death Becomes Her”

James: It’s a lyric taken from a Sublime song (“Boss DJ”) and for me representing a vibe of summer, no worries, being in the moment, no conflict.

James: For me, I’m enjoying lower ABV beers currently and I was wanting a beverage that would quench (hence the watermelon) and also waken up my taste buds (tartness of a Berliner). Plus I love sour watermelon candy.

Nico:  I wanted to make a Berliner Weiss that was light tart and refreshing for hanging out on the beach in the summer.

James: I’ve been surfing for over 30 years and having a clean ocean is important! This foundation looks after one of our greatest resources on earth.

James: Working with Patty Mac and Nico on making this beer a reality.

Nico: I only took part in slicing up the watermelons because I was sick during the brew process, but that alone was pretty rad and I have defiantly  learned how to slice a melon!

James: With friends at the taproom, out on the patio.

Nico: In mass quantity with a side of tums 🙂

What a better way to close out another amazing Maine summer then with a tart, refreshing, low abv crusher. Top it off with a 100 lbs of diced watermelon and you get No Trouble, No Fuss..Our interpretation of a Berliner Weisse, a style that goes back to the 17th century peaked in the 19th. It’s so old, the best quote about it comes from Napoleon’s troops who called it the “Champagne of the North”. But enough history, let’s talk about our version. We brewed it with all Maine Malt from our friends in The County, Buck Farms. 70% Pilsner and 30% Malted Wheat make up the simple grain bill. Only enough hops added(.5 IBU’s) to make sure it was legal to sell because the blend of lactobacillus we used to sour is very hop sensitive. After a quick 10 minute boil we cooled the wort to 95* and pitched the blend. Thirty-six hours later it was at the right level of tartness, so we pitched the yeast and let her rip. Once she was finished fermenting we racked it on to 100lbs of watermelon that were lovingly chopped up by Nico and James. After a week on the fruit it was racked off and carbonated to champagne levels for maximum enjoyment. We love this beer and it was super fun to make and we hope you love it too!

Hops: Not enough to mention

No Trouble, No Fuss… taps this Thursday August 29th at 12:00 sharp! Come in and say goodbye to summer with us!

Bissell X Novare Collab
Account Diaries: One For The Locals