Are you over 21?
Under
Skip to main content
PORTLAND OPEN DAILY FOR DRIVE-THRU SERVICE ONLY | THREE RIVERS OPEN SELECT DAYS FOR CURBSIDE SERVICE ONLY | CLICK HERE TO ORDER BEER & MERCH ONLINE 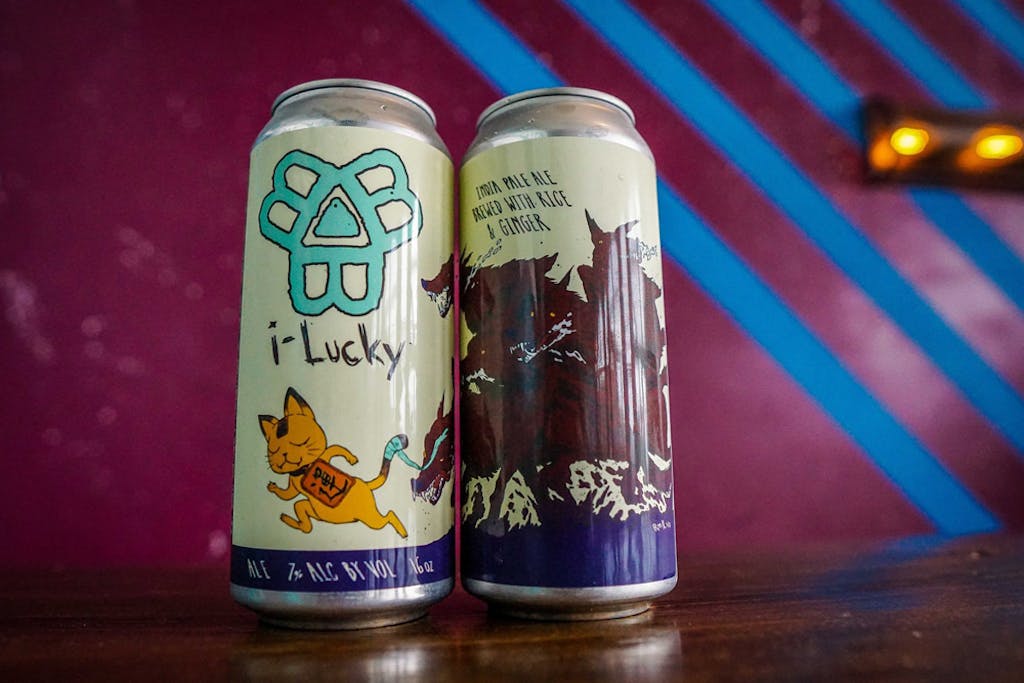 There is a restaurant located in Farmington, Maine that is affectionately known as Thai Smile. Although it has relocated to a new spot across the street, it is assuredly still there. When Noah walked into the original location, during his time in college, it was unlike anything he’d really ever seen. I am told that the place is still a relatively isolated bastion of awesomeness in the town.

Walking inside of Thai Smile, you are met with the aesthetic that you’ve seen over and over at countless take-out Asian food joints. You know what I mean, it could really be any “traditional” Thai restaurant in America. But what made Thai Smile a special place when Noah first walked in (and it still is) was that this place had a craft beer program. Thirty craft beer lines, in Farmington, Maine, of all places. And someone working there who actually cared and knew about all of these beers!

That dude just so happened to be Seth Vigue. When Noah met Seth, a chance meeting at Thai Smile at that, they immediately hit it off over their love of and interest in beer. Yep, Seth was the bartender there, the man behind the sticks, and Noah and Seth quickly became fast friends. Fast forward, and the two are still friends, only Seth doesn’t pour beer for a living anymore, he brews it here at Bissell Brothers.

In April of 2014, just a few months after we opened the doors of our brewery, we were approached by one of our accounts about putting on event, and brewing a new beer for it. The account was Pai Men Miyake, a Japanese-inspired ramen joint. The production crew, then really just Noah and Seth, saw this as an excuse to experiment. They would brew a beer to celebrate Noah and Seth’s happenstance meeting at Thai Smile, a not too dissimilar Thai-inspired joint.

In developing the recipe for the beer at the time, we most definitely saw it as an excuse to try out several new (to us) ingredients in the brewing process. Our goal is to integrate a Japanese-element into the beer, yet not try to replicate Japanese cuisine, per se. We had never brewed with rice, so this was the perfect impetus to incorporate that cereal grain into the grist. We had never used Sorachi Ace, but were intrigued by the applications of the hop that we had tasted in other beers, used to varying degrees of success. We felt that the lemongrass character of Sorachi Ace, sometimes also just slightly verging on dill and coconut, could provide the counterpoint to Citra hops that would provide citrusy mango and stone fruit flavors and aromas. Then, playing off the dryness of the beer imparted from the use of rice, we’d cut it all with a spice—fresh ginger, sliced up and added directly to the whirlpool.

The result was an IPA (of sorts) that was first and foremost a dry beer, light, clean, and crisp. The beer had an exotic, sultry spice character to it from the ginger and the hops, a slight heat, but not expressive of alcohol. Like walking through a jungle in Thailand. The beer was a hit at Pai Men for the event. We then decided to rebrew it, and we’ve since evolved the recipe slightly from its pilot form. But, the goal with this beer is still to provide a holistic experience when drinking it—drawing inspiration from food, but not necessarily tasting like it. To celebrate that first friendship that Noah made at Thai Smile with Seth, and all of the friendships that Noah and Seth have made since, with all of us, here, now. Yet, to ultimately pay homage to where it all started in Farmington.

The current iteration of this beer is built off a base malt of 2-Row Barley, with a moderate charge of Rye to compliment that spicy kick from the ginger and the hops. We also add equal parts of Vienna and Cara-Vienna malt, the Caramel Vienna providing a sweetness, a more rounded, toasty character that wouldn’t be present from use of Vienna alone.

Lemondrop hops, a low alpha acid varietal, added in the kettle provide that distinct lemon, grassy character, yet avoids producing an overly bitter beer. Sorachi Ace hops, featured in the dry-hop, further contribute intense lemon, grassy aromas and flavors. Citra provides the classical tropical notes to interplay with all of the flavors going on, from both the malts and the other hops.  Finally, the addition of ginger, sourced fresh the day we brew the beer and processed literally hours before we add it into the whirlpool after flameout. The smell of that fresh ginger, co-mingling with the addition of the hops, is unmistakable. Exotic, pulsing with heat and spice and radiating throughout the entire brewery.

The name? Well the name is just another way that we use I-Lucky to pay homage to the important moments in time, the memories from our brewery’s past that continually drive us forward. Seth and Pete were on a long delivery run up to Farmington, shortly after we had released this beer—the type of haul where you’re forced to hang out together for the duration, for better or worse. Coincidentally—or perhaps not—they were delivering the beer to Thai Smile.

Seth, having worked there, was intimately familiar with this account of ours, including its owner, a man by the name of Chaiwat but who everyone in Maine knew simply as “Charlie.” After the beer was delivered, and the check was cut, Pete, excited from the end of the delivery run, shouted out to the first passerby, a middle-aged Thai waiter, “Thanks for your business, Charlie!” This waiter, startled and taken aback by the visibly exuberant Pete, laughed deeply, and dismissed Pete by explaining simply, “I not Charlie, I Lucky.”

It is in honor of this waiter, and in appreciation for Thai Smile, still one of our great accounts, that we named the beer “I-Lucky.” A tribute to Lucky, the waiter at Thai Smile, and in a more general sense, a tribute to all restaurant workers everywhere.

To create the label, we leaned upon another restaurant worker, Ryan Lamunyon, who now is one of the folks behind the amazing BBQ at Noble Barbecue in Portland. Pete and Ryan were friends from childhood, and Noah had worked with Ryan at The Thirsty Pig. The next time you drink a can of I-Lucky, pause to take in the perfect depiction of a maneki-neko, a Japanese Beckoning Cat (or, better known as a Lucky Cat) escaping a pack of ravenous wolves on the label. Just try not to (Thai) Smile at the design….

This art captures perfectly the zaniness of the beer, a beer that is niche, maybe so. But, ultimately an exercise in balance from a process and ingredients standpoint. And just like how our favorite restaurants can create food dishes that are so complex and flavorful, yet so balanced, we hope that you find I-Lucky to be a beer that strikes a true balance yet achieves its flavorful end goal.

And with that… Chon gâew, to you Lucky.

Nuclear Whim With the Fuse of A Mile
Assume Positive Intent