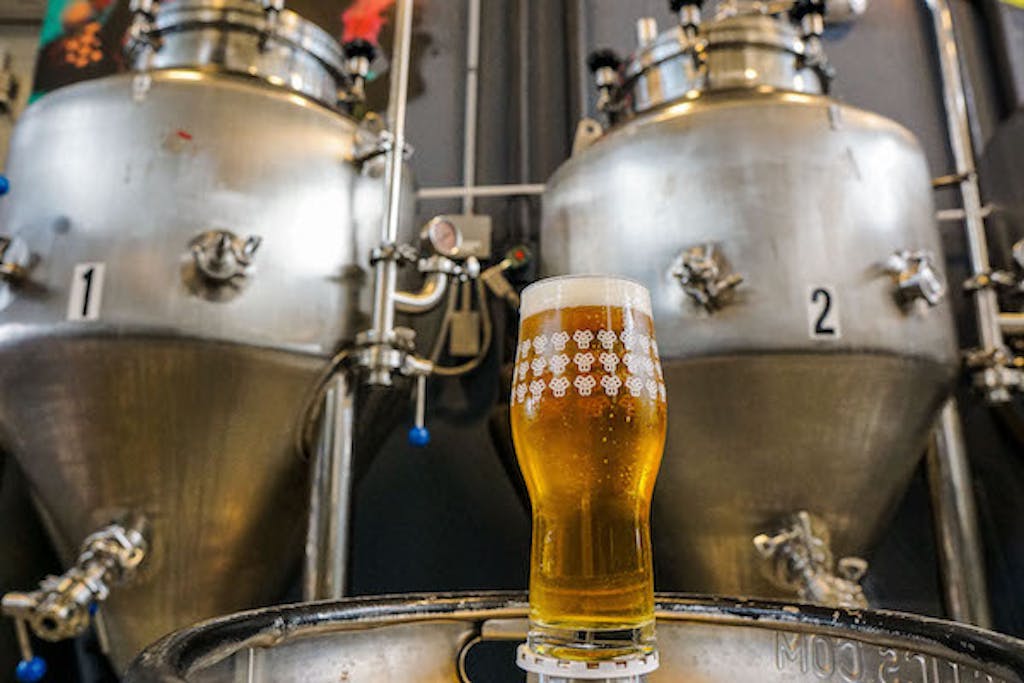 The inspiration for brewing a beer can come from myriad sources. Inspiration might be drawn from a particular brewery, or even a specific brewer, and the impact that they’ve had on your beer drinking, or the brewing zeitgeist as a whole. Inspiration may come from a particular beer style, or even a specific beer, and the effect that that may have had on your palate. The inspiration of brewing a beer could be taken from the memory a drinking a beer in the past, the time, the place, the people, what you all were doing in the moment, hell, even the weather.  Or, inspiration could be the culmination of all of the above.

But let’s back up. When you are brewing a beer for the very first time, there are always inherent challenges and risks that present themselves in just about every single step in the process. You start with an end-beer in mind, that inspiration if you will, and then you go almost blindly from there. Did you formulate the recipe correctly in the first place? Did you hit the brewing numbers that you had in mind on brew day? Will the fermentation go as anticipated? Is it ready to package now, or does the beer need more time?

These may seem like minor details, especially if you are a homebrewer and the worst that comes of a poorly formulated and executed brew day is that 5-gallons of beer goes down the drain, but when you are a commercial brewery, and we’re talking 600-gallons of beer, woah. Those minor details can—and will—keep you up at night.

So, if you are a commercial brewery and you really want to experiment, if you want to brew new, inspired beers, you invest in a pilot system. Brewing on a pilot scale, you learn about ingredients, process, beer styles, all along the way.  In a brewery setting, a pilot system is typically just a smaller brew house than the one that that brewery is operating, and that’s all relative. Some breweries that run, say 100-barrel or larger brewhouses, may have a pilot system that can be 15- or even 20-barrels, the same size or bigger than many other breweries actual brewhouses. For other breweries, their pilot system may simply be your basic, no-frills, homebrew set-up.

We found our pilot system by happenstance, a one-barrel kit from our friends and neighbors at the time at the Industrial Park, Austin Street Brewery. They had quickly outgrown their original one-barrel system, and were upgrading to a 10-barrel brewhouse. They were selling their old system, and we bought it for our pilot system purposes. Together with Jake and Will, we brewed a collaboration beer on that system, a DIPA called “Real Ones,” releasing it at The Thirsty Pig and throwing one hell of a party (one that I won’t ever forget). Since then, the system has been in service for our pilot program….

Now, a pilot system can be implemented for a wide spectrum of uses: anything from purely educational and experimental in nature, all the way to a marketing and sales-driven approach wherein you are brewing beers to test-the-market with the intention all along to scale them up and package. Here at Bissell, we fall more towards the educational and experimental end of that spectrum—in fact, every employee here is empowered to pitch an idea for a beer, create a recipe, and brew his or her “own” beer, drawing on that inspiration that ultimately drives anyone that cares deeply about beer.

Many members of our staff—if not everyone here—has participated in brewing a beer on the pilot system. You may remember some, you may have your favorite: Fiesta Forever, Brownian Motion, Cottage Rumbler, Last Time I Was Here It Was Raining, Don’t Carry It All, Handsome Stephen’s Lagerfauer, Revival, Waveform, and more. One notable beer, namely Kickflip, started as a beer on the pilot system, and is now a full-scale beer in production. As you can imagine, each of these beers were inspired by numerous and different things….

So, for me having the opportunity to brew a pilot beer, the inspiration was, as we talked about above, the culmination of myriad sources. When I was studying Law in Northern California, and drinking through the various beer styles from brewers out west, it wasn’t long before I came across a beer from Port Brewingcalled Panzer Pils.  A 9.5% ABV Imperial Pilsner, this beer checked all the boxes for me: clean and dry, intensely flavorful and aromatic, hop forward yet not overbearing, and at 9.5% alcohol, you caught a warm buzz in a hurry.

Julian Shrago was a celebrated homebrewer who hung around Port Brewing/The Lost Abbey, perhaps a bit too much, who came to be friends with the brewers there. Port Brewing had influenced Julian’s homebrewing, and vice versa, Julian’s homebrews had come to influence Port Brewing/The Lost Abbey. Leading up to the 2008 GABF, the brewery decided to enter the Pro-Am competition with a beer based off one of Julian’s homebrews, ultimately, an Imperial Pilsner. They brewed the beer and were ready to send it off to Denver, but they hit a wall quickly—the competition’s rules at the time supposedly strictly prohibited any submission of any Imperial style.

So, they instead tapped the beer at the brewery, and people loved it. So, they brewed it again, and again, packaging it into 22oz bombers that were seemingly the ubiquitous package at the time. And one of those bombers made its way to me…. Drinking that beer after long days at Law School provided much inspiration for me in the world of beer in general, even in the late 2000’s. But fast forward to now, it most definitely provided the inspiration for my pilot Imperial Pilsner, “Mt. Baldy.”

We brewed this beer with a huge amount of Maine-grown Pilsner, some 2-Row Barley Malt, and a kiss of Carapils. Ironically, this pilot beer wasn’t actually brewed on the pilot system! We were so close to mashing-in on the one-barrel pilot system, but pulled back on the idea, gun-shy that there would be no way we could fit all the grain we needed to push the ABV that high into the mash tun. So, we brewed a “small” batch on our “big” system, knocking out into one of our 3-barrel pilot fermenters.

We pitched our house lager yeast and waited. Fermentation kicked off and kept going.  We thought the beer might finish around 8% ABV, but the lager yeast proved to be super attenuative, drying the beer out in an ultimately very satisfying way, and bumping the ABV to 9.1% ABV.

Our twist, in addition to the use of Maine Pilsner malt as opposed to German malts, was the dry hop.  Unlike Panzer Pils that used traditional German noble hop varieties, we used some new-school German hops: Mandarina Bavaria, Saphir, and Hallertau Blanc, hopping the beer at near DIPA-level hopping rates, almost 4 pounds-per-barrel. After several weeks of lagering, the beer is ready to be released, and I couldn’t be prouder of it. [I’ll take pause here to give a huge shout-out—and just about all of the credit for this beer—to Patty Mc in terms of helping with recipe formulation and overall execution!]

The name, Mt. Baldy, is drawn from the name of a summit in the San Gabriel Mountains outside of East Los Angeles—a mountain that is a favorite of Julian’s for hiking. The name is also our small way of honoring Julian, now an extremely accomplished professional brewer at Beachwood Brewing, a man who is noticeable across a busy bar—or on stage at GABF accepting yet another award (or standing  atop the summit of Mt. Baldy)—by his resplendent, lustrous and shimmering, hairless head.

When you drink this beer, I hope that is inspires you. Or, at the least, that you find it to be (as was Panzer Pils), clean and dry, intensely flavorful and aromatic, hop forward yet not overbearing, and capable of providing a warm buzz in a hurry….

Thanks for reading these y’all.