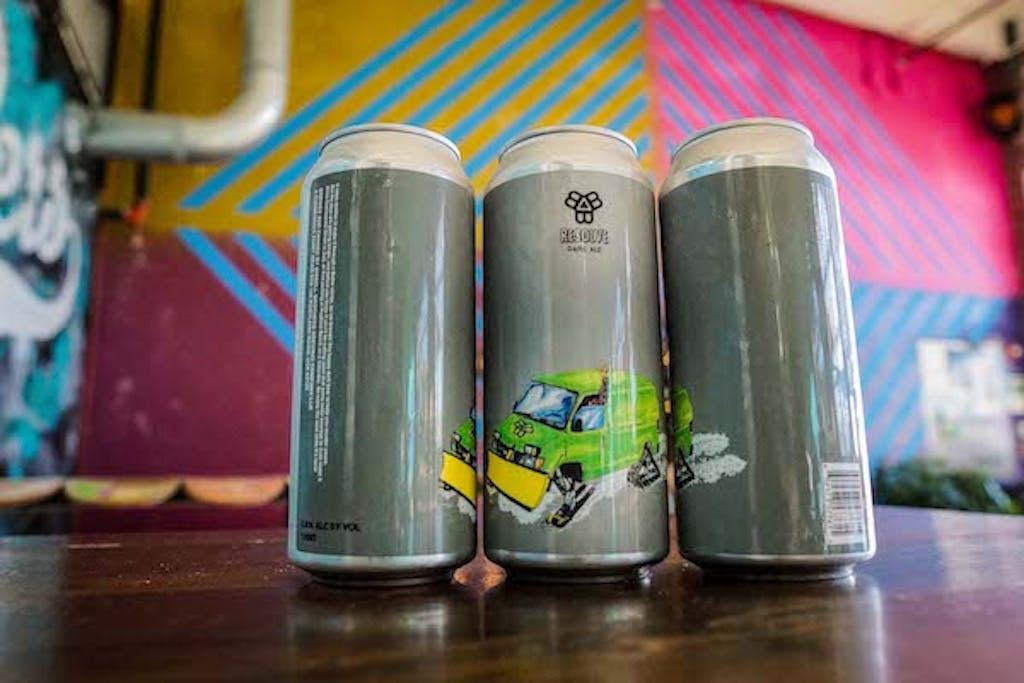 The new year is a time for making New Year’s resolutions, we’re all quite familiar with that common tradition. You decide upon a particular course of action, usually to change an undesired trait or, more typically, to accomplish a new goal—maybe it’s to rekindle a relationship that has gone stale, maybe it is the decision to travel more, read more books, try something new. These may seem like cliché sentiments, but what does it truly mean to resolve to do something?

When we decided that we wanted to brew something distinctly different in our line-up of beers, we had the resolve to collectively decide upon something that we’d not only be excited to brew, but would also be excited to drink. We circulated a mini-poll to all staff, and our team settled on brewing a hoppy dark ale, at least in concept. Something different! Not necessarily the most popular, best-selling of beers—in 2018, no one is walking around claiming “I only drink exclusively Black IPAs,” but beers of this style can be a fun switch-up, and when done well, they can taste great.

A quick history lesson for those who may be unfamiliar with the style, dark hoppy beers witnessed a fast and fierce rise in popularity in the mid-2000s among American Craft Brewers. Greg Noonan at the Vermont Pub and Brewery actually invented the style years before that, but when these types of beers started to be brewed by more and more breweries, those brewers who thought that Black India Pale Ale was an oxymoron (and particular those brewers in the Pacific Northwest) claimed the style as Cascadian Dark Ale. And so, the lamest debate in craft beer’s history began, coinciding with the rise of the beer style, Black IPA or Cascadian Dark Ale? One brewery infamously even tried to claim the style as an Escondidian Black IPA!

Whatever you call it, the concept was—and is—the same. Brew a beer that drinks like an IPA but is dark in color. It was often done poorly. Think of all the bitterness in a classic West Coast-style IPA, and then load more bitterness on top of it, an acrid bitterness associated with the use of dark or roasted malts. As you can imagine, with many breweries producing not-so-very-good examples of the style, Black IPAs started to fade out of popularity, nearly just as fast as it rose. But, some breweries stuck with it….

One of those breweries was The Alchemist, another Vermont brewery, one that undoubtedly took its inspiration from Noonan. Unlike many Black IPAs, The Alchemist’s El Jefe was brewed on the base of a “newer school” IPA, a softer, less bitter, more aromatic IPA. Softer all around in profile with those modern IPA elements blending perfectly with the roasty components. First tasting this beer, we thought it was truly awesome, we thought that this can actually work! El Jefe still remains a refreshing perspective on the style, and it is a beer we never buy enough when The Alchemist releases it each year around the holidays.

So, when our Team resolved to brew a Black IPA, we used El Jefe as the spark for the idea of what our own hoppy dark ale might be. Our beer starts as a Mosaic focus, with the idea that the roast component in the beer would lend the Mosaic hops to impart more of a berry character, much in the same was as a great light-roast coffee presents itself as berry forward. With Mosaic playing the lead, we then use Simcoe to impart modern, classic hop characteristics, and an underlying kiss of pine. Ella rounds out the dry-hop, with the idea here that those classic Australian hop characteristics (that we’ve talked about before) would lend itself toward more of an anise, sweet licorice presentation, balancing nicely with the roasty malts. This hop combination results in an experience that lives within the spirit of El Jefe, but is clearly our own take on a hoppier dark beer.

For the grain bill, we knew that we needed to tread lightly. It’s so easy to find yourself in a terrible place as far as bitterness and astringency and acridness goes when you need to use those dark malts required to achieve that color. We start off with a base of Golden Promise, one of our favorite base malts for IPA brewing, and add a good percentage of malted Oats in order to soften the malt presence, and again, in the spirit of El Jefe, make the beer a softer experience all around.

To achieve the color in the beer, we cold steep dark malt in a 3-barrel tank for 24 hours, much like you would cold steep coffee. The resulting “joose” left behind after just 24 hours is remarkable, blacker than anything you could imagine, and potent. A little goes a long way! We inject this joose directly into the whirlpool at flameout after boiling the beer, on its way to the fermenter. The color and flavor from the cold steep is softer, more restrained in this application, than it would be using the same percentages of these malts in the mash. This technique imparts the perfect roast compliment to the hops that we are hoping for.

We are very proud to brew this beer, in particular. Sure, it’s not one for everyone’s palate, but as this industry evolves and matures, it is becoming evidently more and more cyclical in nature. This beer, in its own small and humble way, represents a contributed expansion on what’s considered relevant and valuable in this industry. It is a beer, we believe, worthwhile drinking both in concept and in execution.

We brew and release Resolve in the colder months (also, coincidentally just in time for the New Year and those resolutions, whatever yours may be). It’s our nod to Maine, to those three months of winter when you put your head down and bear it, when it takes true resolve to make it through the cold and dark. A reminder that beer doesn’t stop, no matter what the weather.

And the label reflects this as well—a grey, desolate and barren backdrop is punctuated by our friend’s, @itsfusillijerry’s, caricature-ization of the Green Bastard, our old delivery vehicle that has always proved a beacon of help, a change of pace, a flash of some color. As this label intends, we hope that Resolve proves to be a beacon of help for you this winter, perhaps to keep your resolutions, to accomplish what you decide you will do, and that this beer provides a change of pace and adds a flash of some (dark) color to your IPA enjoyment.