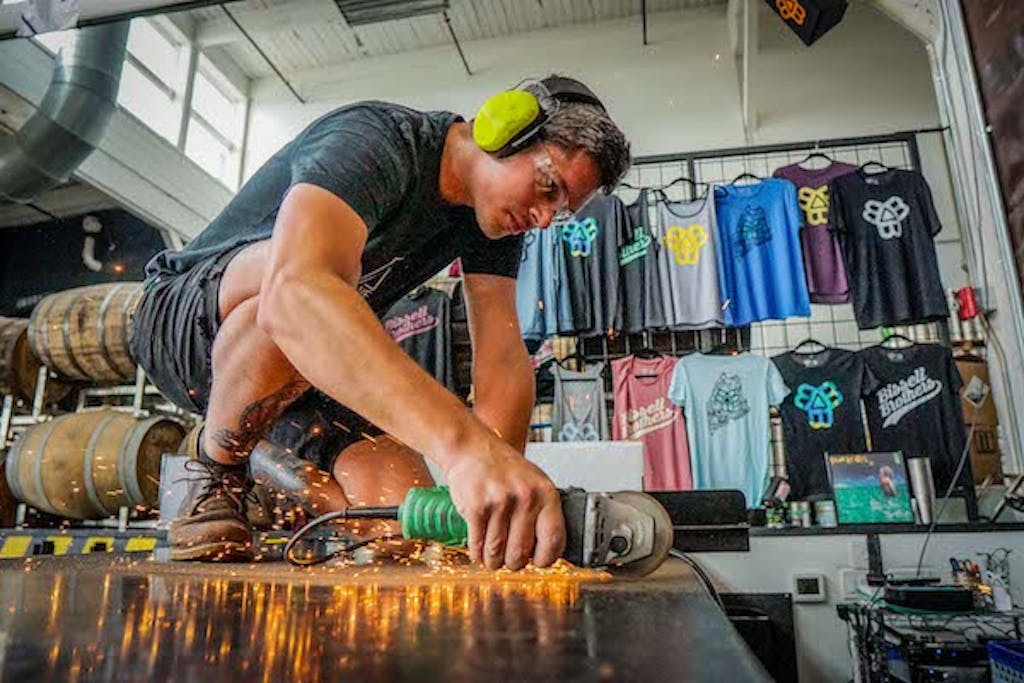 There’s a fine line between what you want and what you need when it comes to complex beers that are nuanced, impactful, yet drinkable. Some beers never make it up to that line, some beers way overshoot it. Some beers, however, stand right there in between. Those beers, when you drink them, those are the beers you don’t forget.

Hops and funk—specifically funk that is derived from the use of Brettanomyces, or “brett,” a wild strain of yeast—are often thought of as being representative of two different worlds when it comes to beer. And although joining worlds in a beer can be a fun novelty every now and then, it’s not necessarily something that you always want to go back to, again and again. It’s easy to overdo it, conflate the two worlds, creating something that is regrettably less than the sum of its parts.

But when beer worlds join together in a clean, compelling way. Oh wow, yep, those are the beers you don’t forget.

Back in the early 2010’s, we individually and collectively discovered the beers from Anchorage Brewing Company in Alaska, just as these beers made their way to the contiguous United States. Beers like Bitter Monk, and a “IPA” simply called Galaxy, in particular, stood out in a unique way. These beers demonstrated that hops and brett could, in actuality, join worlds in a beer. A clean joint, at that, nuanced and dry. An intrinsic hoppy character that was elevated, not muddled, through fermentation and conditioning on brettanomyces.

By the time Allagash released Little Brett, oh man, we were hooked on this “style.” A clean base of 2-row malt, the singular use of Mosaic hops — one of our favorites—and the fermentation profile of Allagash’s house brett strain. This beer was such a clean expression of both the hops and the brett components, a fruity pineapple brett and hop character that drinks dry as hell. We loved, and still love, it. After you’ve had a bottle of Little Brett, you don’t forget.

And so Allagash — as that brewery has done time and time again, not just for us, but for countless other breweries in Maine and across the United States—served as an inspiration. For us, that inspiration was effected through our pilot brewing program. Two of our staff, Kevin Broydrick and Alex Lawlor, approached Noah about brewing a beer similar to Little Brett. It all sounded great on the pilot level, so the trio ran with the idea.

That pilot beer was a successful one, by all means, a Pale Ale strength beer hopped generously with the tried and true combination of Mosaic and Citra hops. Primary fermentation was conducted with a co-pitch of Brettanomyces drei and Brettanomyces claussenii, aiming for the fruitier side of brett, as opposed to the straight barnyard funky side. The idea of co-pitching these two strains for primary fermentation was to hopefully see a full fermentation, a full attenuation of the beer that might not result from a pitch of just one strain alone. The beer finished dry, and proved a clean expression of both the hops and the brett, extremely drinkable. A tropically dank expression of the hops, balancing with an acidic, esoterically funky and fruity expression of the brett. It quickly proved to be one of the most popular beers to come through the pilot system.

Fermenting a hoppy beer with brett is a fun thing to do, but also extremely difficult to execute on a production level in a “clean” brewery. Not impossible, but definitely a beer that would prove challenging for us to try and brew in Portland at HQ. But as we looked to our second facility in Milo, we knew that this location could be the perfect place to realize this beer—a beer that we named Waveform after the Pinegrove song that Kev and Lawlor and all of us love—on a bigger level. The name was the last piece to the beer, a fitting tribute to the friendships that it was created out of. And we just knew that we had to brew it again.

And in fact, as we were building and planning Three Rivers, this beer was the first beer that Noah wanted to feature for growler fills in Milo in retail. It just made sense. This beer, the joining of the two worlds of hops and brett, it represented a tangible bridge between our two spaces, between Portland and Milo. A bridge between the two styles of beer that we brew in each location, between the clean, hoppy beers from Portland, and the nuanced, esoteric beers of Milo.

When we re-brewed this beer up in Milo, we started with a slightly bigger version of the grist bill that we use for Baby Genius. Pilsner malt, some wheat, some oats, and a decent amount of Vienna malt in the grist, not for toast character, but instead to build the body of the beer. The point of using the Vienna is to prevent the brett fermentation from drying the beer out too much, preventing a thinness to the beer that we were looking to avoid.

For hops we again used the tried and true combination of Mosaic and Citra, tempered slightly with the use of Ella as the third hop in the beer. The Australian, slightly anise character to the Ella hop imparts a distinct tannic contribution that helps aid in the body, subtly, as well as lend some spicy and woody elements to temper the display of fruity notes. But ultimately, the beer demonstrates all these hops in a completely new way, a different profile entirely, thanks to the brett fermentation.

For fermentation, we again use a co-pitch of the two brett strains, Brettanomyces drei and Brettanomyces claussenii. This batch leans slightly toward the funkier side of things, but ultimately it is a clean expression of the two worlds that we so wonderfully enjoy in a beer like this. It’s by far and away the most popular beer that we currently brew in Milo. Not a flagship for Three Rivers, but a beer that will always find its place there.

Hops and funk. Portland and Milo. Standing there right in between. Take a sip and you won’t forget.

BANGOR DAILY NEWS
Here's to Feeling Good All the Time