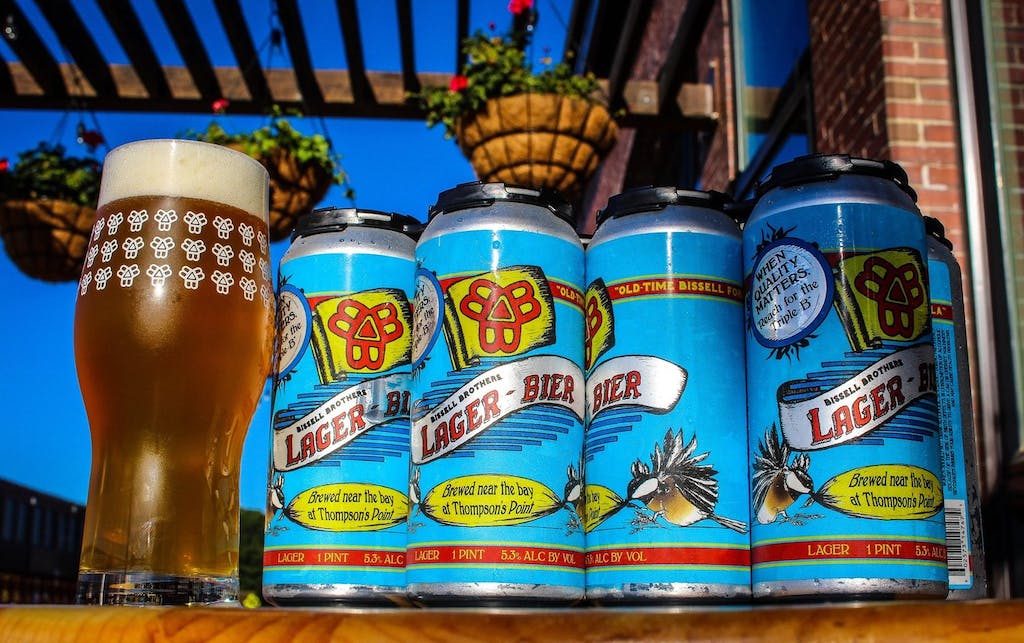 Sometimes the inspiration for a beer, or the inspiration for anything worthwhile doing in life’s pursuits, can strike in the most unexpected places. You may be walking along the street and happen upon something unforeseen, sparking that creative drive that you need to make something special in your own right. But sometimes, that very same inspiration can come from the obvious. A “no-shit” moment, wherein that place in time you know exactly what you need to create.

For Lagerbier, the first Lager that we brewed, serving as the baseline of our Lager program, it was definitely the latter. Noah and Peter were traveling overseas with their father, Jensen, visiting the historic, iconic beer destinations of Germany. Cozied into the Tavern at Mahr’s Brau in Bamburg, they discovered a pitched-wooden cask of Mahr’s Brau Ungespundet Lager, or better known as “U-Bier.” Served gravity-fed from a table in hearty mugs, the pours of beer prominently featured a perfect collar of foam, a head on the beer that you’d expect from employing a traditional side-pull tap.

Raising the mug of beer to his lips, Noah smiled. In this moment, inspiration truly struck — this here in his glass was everything that is good about the simplicity of beer, the nuanced elegance of Lager in general. The sublime mix of beer in-its-essence. The definition of beer. Malt driven and well-hopped (but not hoppy), there was literally nothing that Noah could think of, save a mild alcohol content, that would limit him from drinking this beverage exclusively for the rest of his life. This was a life-changing, oh-my-god, Lager experience. This was absolute inspiration.

Six months or so later, Noah and Peter were back in Portland, Maine, and we were set to release our brewery’s first Lager, simply called “Lagerbier.” Although entirely inspired by U-Bier, our Lagerbier is totally different, save perhaps the malt character. Our beer is malt-driven, sure, although subtly done so. There is just enough Munich malt to give the beer a firm, bready quality. A steady heart and backbone to the base of Pilsner malt. A bracing malt impact, like grasping the reins of a traditional horse drawn beer wagon, navigating powerful work horses down the Weisen at Oktoberfest. Bringing Lager beer satisfaction to the masses.

That malt impact in the beer is balanced delicately by a unique hop combination of Maine-grown Sterling, Mittelfrüh, and Lemondrop hops. This hop trio provides a little lemon-y spritz character, as the Lemondrop name would imply, but nothing notably jumps out. There is a rounded, noble, crisp, but slightly earthy, hop balance to it all.

We ferment the beer on the slightly-warmer side for our Lagers, but it certainly undergoes a full and clean and proper Lager fermentation. We then lager the beer in one of our horizontal tanks at near freezing temps for a duration of time that intentionally delivers a “younger lager,” our take on a Kellerbier—an unfiltered, unpasteurized lager. This provides a deliberate sense of wholesomeness, some subtle yeast-driven characteristic, another way to impart additional nuance and balance into the beer.

As such, Lagerbier it is simply a well-balanced lager that isn’t trying to be anything but a well-balanced Lager. This beer isn’t a Pilsner or a Helles, and shouldn’t be conflated as one — to do that would be to diminish the qualities of both of those traditional, categorical styles, as well as to diminish what Lagerbier is in the glass. This is a beer intending to be a flavorful and crisp, delicious and satisfying, drinkable Lager.

And the name, the ambiguity in simply calling this beer “Lagerbier,” is not for lack of creativity. No, it is entirely intentional. This beer is a Lager that hits all of the boxes. It is a Lager that we are proud to feature in our program, and it’s a beer that we relish the opportunity to brew and to drink.

You may think of brewing hoppy ales as painting on a huge canvas, wide brush strokes, large swaths of color and noise and stimulus coming out of the package. If that is the case, then brewing Lager is the intentional art of putting all of that color and flavor into a succinct, tiny little package. A gift box that when the drinker opens it up, that package will yield unrivaled beauty.

When you open your next can of Lagerbier, do so knowing that we carry all the intentions of a beer in-its-essence in mind. Enjoy it every day, for all occasions, the unexpected and the obvious…