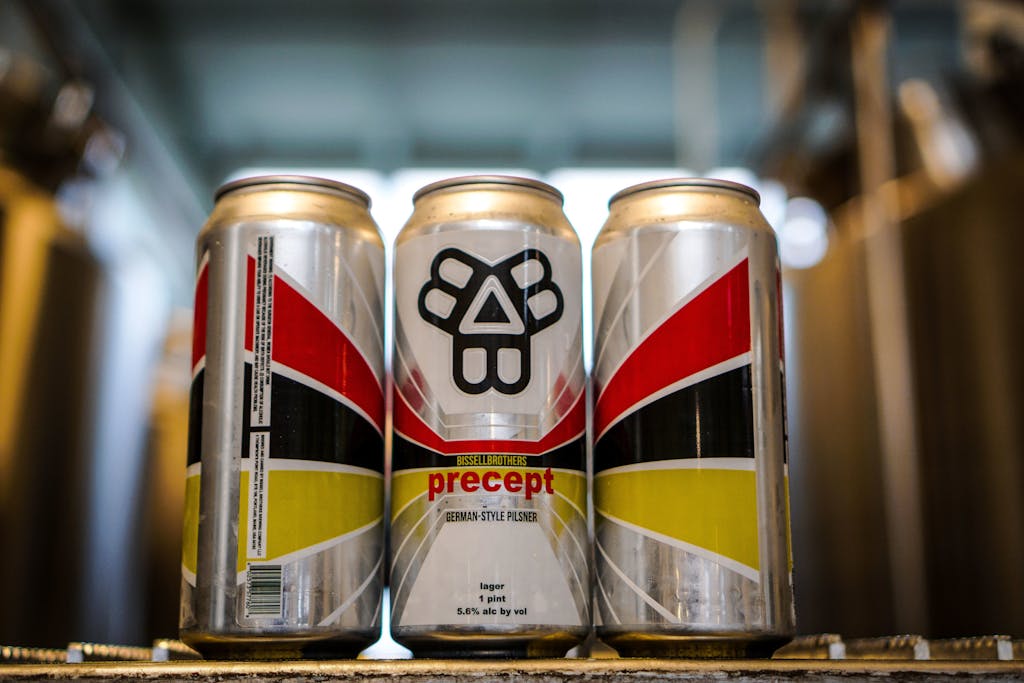 Ron’s Market off of Franklin Avenue in Farmington, Maine isn’t really all that well-known. Hell, you probably have never heard of the small grocery store situated near the University of Maine campus. But when Noah and Geoff were living in the town, roommates and friends, they’d certainly had heard about Ron’s. They actually frequented the market–from what all outside appearances was just a modest establishment–quite often.

But in reality, Ron’s is so much more than the dime-a-dozen, pizza-by-the-slice, tobacco, and snacks store it might appear to be. It’s also one of the best beer stores in Western, Maine, while remaining totally unpretentious. It is a place to get a discounted keg of Natural Light or to pick-up that six-pack of enlightened craft beer. And speaking of enlightenment, that was where Noah went to buy the Prima Pils.

Victory Brewing Company’s Prima Pils–best enjoyed fresh, by the half liter, and with good friends–would serve, in part, as the beer inspiration for our lager program here at Bissell Brothers on the commercial level. It certainly provided inspiration for what would become our Pilsner. The combination of depth in the beer, dryness, with a floral and hoppy character. The sensation of entering a greenhouse, almost humid. A mouthfeel that isn’t full in the traditional sense, but an airy, pillowy roundness to the beer. The definition of refreshment and drinkability.

Drinking beers like Prima Pils, and other classic German beers Noah would discover at Ron’s, beers like Rothaus Pils and Weihenstephaner Pilsner, would inspire him to want to brew a German-style Pilsner of our own. But it was two trips, one trip to drink Prima Pils at the source at Victory Brewing Company in Downingtown, Pennsylvania, the other trip to drink lager in Germany, itself, that would truly get us there. The first trip solidified the fact that Prima is one of our favorite beers, ever, period. And that’s just as true for Noah as it is for most of us working here today. The other trip informed us of the German yeast that we would brew with in our lager program.

Noah and Pete and their father landed in Germany early one morning in February of last year. They drove southwest, outside of Munich to the Andechs Brewery and Monastery, a journey to visit “The Sacred Hill.” They arrived just around 11:00 am, still early on a grey, dreary Sunday morning, and hiked up towards the picturesque mountaintop Benedictine Abbey.  When they stepped into the Bierhall, the place was absolutely jam packed, hundreds of people already there–and every person was drinking lager (the sole exception were those folks there sipping the frothy delight that is Andechs’ Weissbier).

That moment of drinking lagers at Andechs is forever burned into Noah’s head, and why wouldn’t it be. You see, the brothers were there with their father to escape a bit, a respite from the daily grind in Maine. A break from the culmination of life’s occurrences that takes a toll on us all. The Sacred Hill was the first stop of the trip for the trio, the first time that any of them had been in Germany. The flight was long, the journey to that moment in time was simply exhausting, mentally and physically. But that first sip of that Andechs lager was so deeply satisfying and fulfilling.  Clean, full, and delicious. Exciting, celestial, every bit awesome and every bit an inspiration.

And after that trip to Germany and the experiences there, Noah knew we wanted to brew with that Andechs lager yeast strain. In part, to try to recreate in a small way his experience sipping lager in Germany. But also in part to brew lagers of that certain disposition that we all wanted to drink. Fermenting with Andechs on the cold side results in a low gravity beer that is not quite as dry in the perception, but imparts an indescribable fullness. A true lager fermentation character. The foundation of a delicious, clean, compelling and drinkable beer.

Precept starts with a solid base of German Pilsner malt, along with a kiss of German Wheat. Although our brewhouse system in Maine is not built for a traditional decoction, the beer undergoes a three-step mash temperature schedule to enhance that Pilsner mouthfeel we love and to ensure a dry, fermentable beer.  The beer is hopped generously on the hot-side with Czech Saaz and Hallertau Mittelfrüh hops, grassy low-alpha acid hops that yield a biting, definitively German Pilsner (as opposed to Czech Pilsner), hoppy character.

We ferment the beer for two weeks in a conical fermenter, much like we would any other beer, albeit at much colder fermentation temperatures suitable for lagers. Perhaps, our one new-school “American” twist is to finish the beer with a delicately light dry-hop of Motueka, a Saaz-derived New Zealand varietal that imparts a zesty crispness and just a slight bit of hop haze.  Motueka does not overwhelm, but provides a slight subtle hoppy accent.

We then transfer the beer into a horizontal conditioning tank where it will undergo a long conditioning period at near freezing temperatures, maturing for up to 8 weeks.  The beer drops nearly bright, a beautifully bracing yellow color. The 8-week conditioning and lagering period ensures a crispy, succinct finish. A large measure of patience for a beer that is so simple to drink.

Much like the beloved Prima Pils, our German-Style Pilsner, Precept, is best enjoyed fresh, in a large glass, and with good friends. Much like the name of the beer may hope to imply, it is our dictum of Pilsner, and of pure refreshment and drinkability.