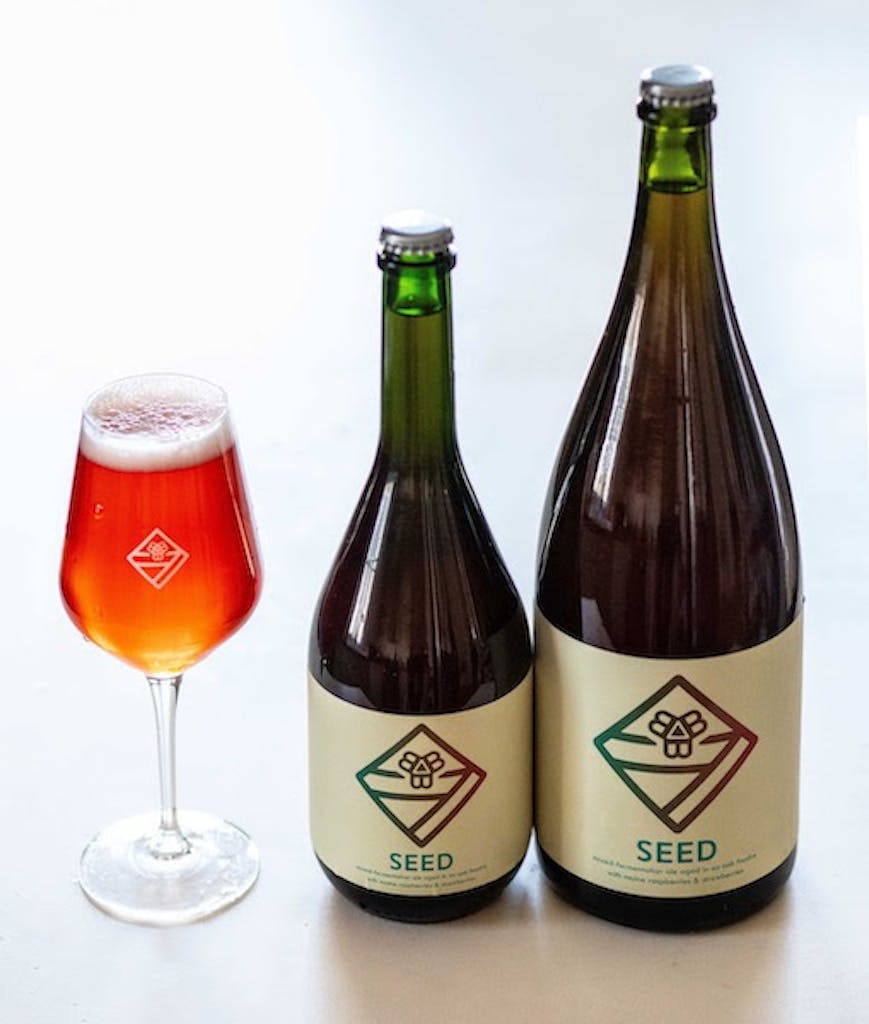 Some beers have a relatively straightforward trajectory for the conception of a recipe, the brewing of the beer, the packaging, and the service. Some beers, on the other hand, have a pathway that is much longer, the culmination of that beer in the glass being the result of a journey of sorts.  Much so the latter, Seed, this year, is a beer that’s had a journey. One that’s been four years in the making.

Way, way back now, or so it seems, in the summer of 2014, we first met Charlie and Aimee as they were operating a pretty awesome, yet simple, burrito cart, Locally Sauced. They’d set up shop in the Industrial Park, just outside of our old location there, and each time we saw them arrive we were stoked, knowing fully that we’d be eating well, and sharing some great conversations with the pair that day.

Although these conversations covered many different topics, it wasn’t really until later on in the winter that year that Noah had his first conversation with Charlie about fruit. Although at first blush that might seem odd, it truthfully wasn’t—you see, Charlie and Aimee also operated Bradbury Mountain Berry Farm. And that conversation, about locally grown and delicious whole fruits from the Farm in nearby Pownal, Maine, immediately sparked enthusiasm in Noah and in our brewers’ minds about fruit and beer, together.

Using fruit in beer seems like a fairly standard and mundane thing these days at a brewery. It’s been done before, certainly, and with the availability of products designed with brewing in mind — fruit puree or extracts, let’s say—fruited beers are almost ubiquitous. But whole fruit, that’s different—with whole fruit, you only get one shot, there’s only a finite amount of fruit to use, and when you put that fruit into a beer, you can’t do that again until more fruit is grown. So, whole fruit is special in that sense, first. And that doesn’t even really begin to get into the numerous other variables at play when using whole fruit—processing, contact time, water content, et cetera, et cetera.

We were definitely attracted to the idea of using whole fruit in a beer, and with our strengthening relationship with Charlie and Aimee and the Bradbury Mountain Farm, it seemed like the ideal partnership.  For the first time that we would brew a beer that we’d call Seed, we brewed a relatively straightforward fruited Pale Ale, using strawberries and raspberries from the Farm. It was overwhelmingly expressive in fruit character, despite maybe not being the most sophisticated recipe for a fruit beer. But we were optimistic with the outcome—you could just tell that it was a beer brewed with real fruit.

For the next years of brewing Seed, now an annual offering in our line up, we employed some kettle souring techniques in an attempt to replicate what we always hoped that Seed might be—the ultimate vision namely being a long-term project, a mixed fermentation beer, brewed and conditioned using the correct equipment, a beer that spends time aging on oak and is bottle conditioned. For these next two batches, we still used whole fruit from Bradbury Mountain Farm, both strawberries and raspberries, but we couldn’t truly execute our final vision for this beer. The results, as you may recall from last few years releases, were great beers, but they still lacking a touch of sophistication, if you will—still no mixed fermentation, no oak, and no aging. No true depth of character that is a result from those processes. Beers that were still shy from the Seed fully realized.

As Milo was coming together, it was honestly a seemingly insurmountable amount of work and stress, but one thing kept Noah giddy the entire time about building out a second production facility—and that was Seed. Bissell Brothers Three Rivers was, and is, the place where we can actualize what we always hoped that Seed would be.

And so, Seed batch 4 is the first stage in the final chapter of what this beer will be. Comprised of two-thirds wheat, and one-third pilsner malt, all from Buck Farms, all Maine-grown grains, this base beer saw primary fermentation using a red wine yeast strain plus some microbacteria to impart some additional fruity, berry esters from the fermentation profile. We then racked this beer into a foeder from Foeder Crafters, directly on top of this year’s harvest of strawberries and raspberries.

In the foeder, we let our blend of two brettanomyces strains, as well as lactobacillus and pediococcus, go to work on the sugars in the fruit and complete fermentation. And then we waited. The next process step for this beer was simple: time. We conditioned the beer for a relatively long contact time on the fruit, roughly five months.  Just about two pounds of fruit per gallon of beer, two-thirds of that strawberries and the rest fresh raspberries. Tasting it all along the way, we were thrilled when it was ready for packaging.

But before we could share and enjoy it, more time. We put the beer into bottles still, uncarbonated, and bottle conditioned the beer by dosing it with a bit of priming sugar when it was going into the package. The result is an extremely dry, effervescent, highly carbonated, prickly, pleasantly tart, and well, fruity beer. You taste both strawberry and the raspberries, but there is a distinct strawberry component to this year’s Seed that is unmistakable.  Again, it’s the whole character of the fruit that is the only way to make this really happen. Close your eyes and imagine biting straight into a fresh strawberry.

After four months of bottle conditioning, this beer was finally ready for release in Milo, and now in Portland. And although this year’s Seed may be a bit “late” on the schedule, we feel that it is entirely worth the wait, and then more. Open a bottle, and sip and savor a beer that was a year’s time in production, but also four years in the making.

We are happy to share Seed, once again, with you all, and we thank you for being a part of this beer’s journey….