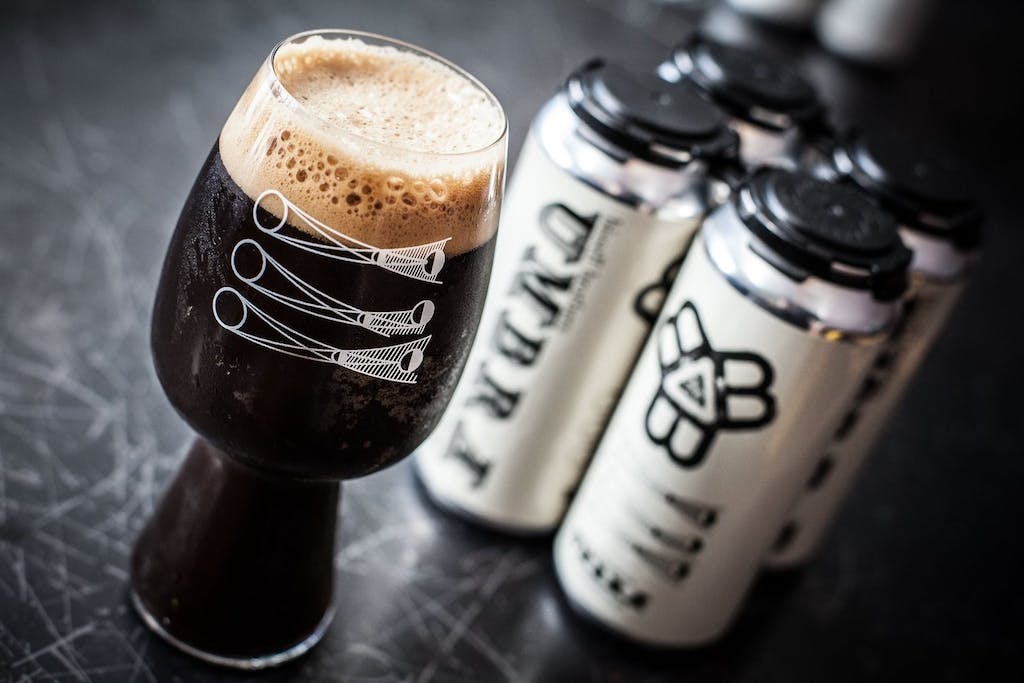 To say that the wintertime in Maine can be “dark” is, well, a simplified way to put it. This overgeneralized descriptor doesn’t truly do justice, however, in conveying just how challenging, how brutal, that this stretch of winter months can be. You wake up and leave for work, it’s dark out on your commute. The moonlight illuminates your breath, visible in the cold quiet of the morning. You finish work, head home, and it’s already dark once more. Snow is falling and although it’s perhaps just yet 5:00pm, it is already nighttime and the cold is setting in.  Impenetrable cold and total darkness is the reality this time of year in Maine, more often than not.

But, despite the dark and despite the cold, life goes on for all of us. And for us at the brewery, that means thinking and drinking beer. As cliché as it might be, for the colder months, for a dark winter day, there is maybe nothing that we crave more than a decadent, rich, dark beer. It just kind of makes sense, feels absolutely right.

Over two years ago now, when we were thinking about what beer we might brew next, the winter months were rolling in, and we had dark beers on our mind. We’d yet to regularly brew a dark beer on the commercial scale, so the impetus was certainly there for one—we settled upon an Oatmeal Stout.

There are myriad ways to approach brewing a beer in this style. There are various goals that you can have in mind when you develop a recipe, when you decide what it is exactly that you are setting out to brew. We wanted a dark beer that would be sessionable, in that you could drink it any day you pleased, but that also was heavy. Heavy in all of the ways that you want it to be, satisfying, rich, and big. To avoid an overly acrid beer from reliance on such a high proportion of crystal and roasted malts in, let’s say a Stout, we decided to use oats, hence an Oatmeal Stout. This smooths the acrid edges of the beer, incorporating instead the roasty, coffee, chocolate flavors into a balanced package.

We wanted a distinct, pronounced level of richness, however, and so to that end, the beer has a higher ABV than is traditional for the style. Yet, we wanted our Oatmeal Stout to remain approachable and drinkable, it’s not a special occasion beer by any means, go ahead and open one on any evening. We were interested in brewing a beer that could support the addition of adjuncts, or that could see an application in a barrel, that could have definitely been one approach. However, we wanted a beer that didn’t need that in order to provide everything that we wanted in a dark, dark beer.

To do this, we focused on layering the grain bill, creating perhaps the most complex grain bill of any of our beers. In fact, Umbra is a total showcase of the grain bill, because unlike any other beer that we brew, this one is all about the grain bill—the use of Chinook hops in the kettle are merely to provide bitterness to temper the sweetness of the malt character.

Ultimately, this beer balances nine different malts in unity to create the complex, dark, decadent flavors that we strive for. We start with a base of Maris Otter, a heritage English barley malt that we love for its bready, biscuit profile. A touch of 2-Row barley rounds the base out, and then we add roughly 10% of Maine-grown Flaked Oats into the grist to, again, temper all of the dark malt that we are about to use.

We then employ a bit of a see-saw approach, attempting to keep everything in balance. We use some lighter Crystal malt to impart a more delicate, restrained malt sweetness, alongside some Dark Crystal malt to deliver a caramel punch. We use some Pale Chocolate malt to provide a marshmallow-y, almost milk chocolate character as a counterpoint to work alongside the Chocolate malt that will deliver dark, bitter chocolate aromas and flavors.

We use a small percentage of Roasted Barley to contribute the coffee and roasty aromas and flavors that add complexity and balance and play against the chocolatey and sweet flavors of the Crystal and Chocolate malts. A final addition of Midnight Wheat provides a bridge between the chocolate and coffee flavors, imparting a neutral dark bitter character that only further adds to the depth and breadth of this Oatmeal Stout.

With all this dark malt, Umbra is not an easy beer to brew on the technical side, per se, but it’s by far the best smelling beer to brew—like walking into the naughtiest bakery that you’ve ever been too. Yep, if you’re around the brewery on an Umbra brew day you cannot help but smile in olfactory delight. Pour the finished beer into a glass, and all of this aroma jumps straight out. And the beer is as dark as the name implies, Umbra, the innermost and darkest part of a shadow. Total darkness, only in beer form.

But, putting the smell and appearance aside, this beer delivers everything that you would hope from a dark beer as far as flavors are concerned. Intensely satisfying, almost primally so, it is rich, and decadent, and deep. A complex ride of roast and coffee and chocolate, with just a kiss of underlying warmth.

Industry Versus Inferiority
Nuclear Whim With the Fuse of A Mile