Blind Ambition | You Earned It Series

This entry to our You Earned It series is Blind Ambition, a gluten-free* IPA. You Earned It is a program in which our team members take turns brewing a batch of beer on our pilot system. A portion of the sales from draft pours and cans sold are donated to a non-profit of their choice.

Blind Ambition was made by brewer Mat Weinstein, a former gluten enthusiast who had to eliminate it from his diet after discovering a wheat allergy. While he’s been experimenting with gluten-free beer on his home brew system, he’s missed the classic “brewery experience” where he could sit down in our taproom and enjoy a simple beer. He hopes to provide fellow gluten-free dieters with that opportunity in this delicious, well-balanced, and gluten-free* IPA. The brewing process required a ton of extra effort: DEEEEP cleaning all of the necessary equipment (and there’s a lot of it), brewing with non-traditional grains, mashing in by hand… he left no stone unturned to prevent cross-contamination. But his hard work paid off as we had the batch tested and it came in well under the FDA’s “gluten-free” threshold. The name was inspired by the uncertainty of his home brewing efforts scaling up to a commercial setting – turns out that Blind Ambition can result in a pretty fantastic beer, and our first-ever gluten-free* release. Mat chose to donate the proceeds from his beer to Woodfords Family Services, an organization committed to the support and inclusion of people with special needs in Maine communities.

*Produced in a facility that also processes gluten. 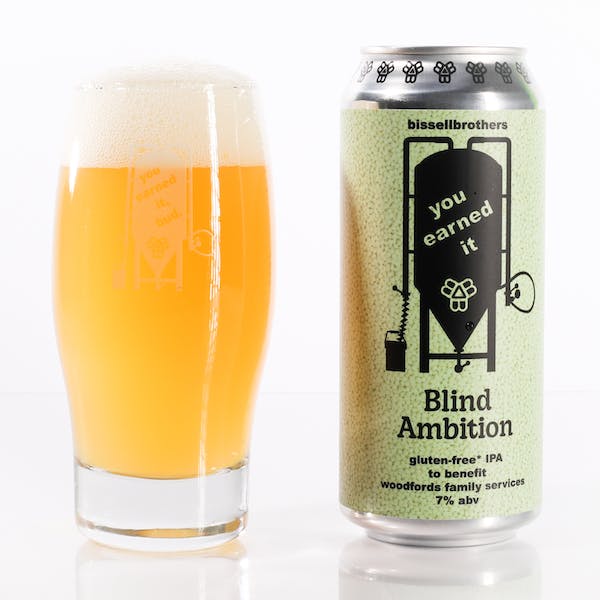