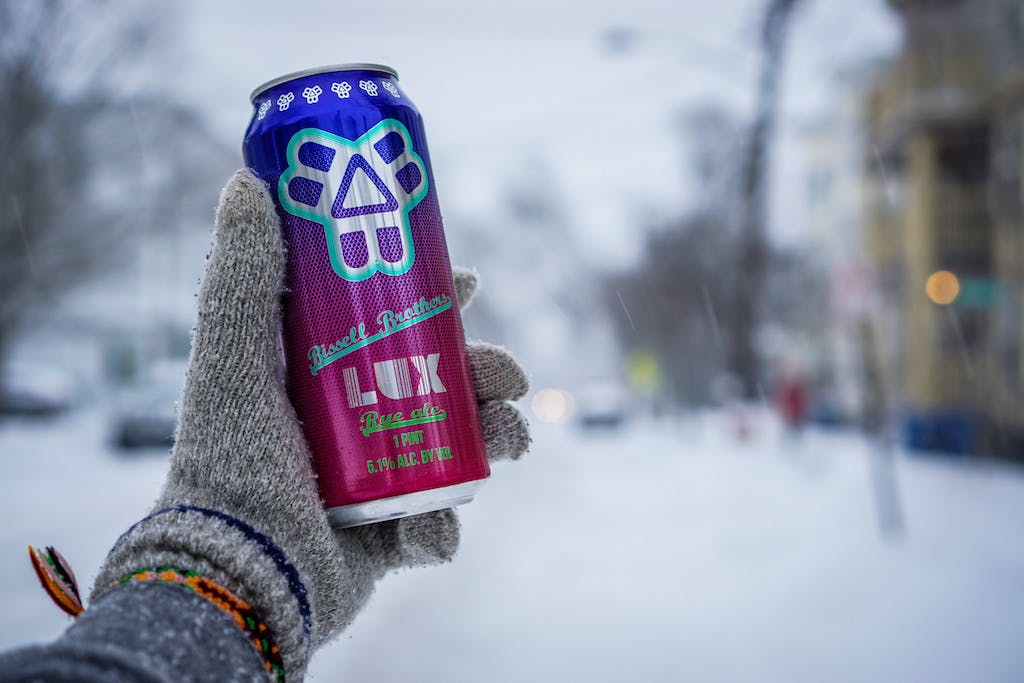 It was Wednesday evening, April 23, and the year was 2014. It was still early on in the night, but there was already a line forming out the door at Mama’s CrowBar on Congress Street on Munjoy Hill. This “beer only-cash only” dive of a joint, a known Allagash Black house, was hosting us for an event.

After many months of being open at 1 Industrial Way, but brewing just the one beer, The Substance, we were invariably eager and looking forward to the start of signing on to our hop contracts–finally we’d have the chance to experiment and brew with some of the “sexier” hop varietals that we were excited about.  One of those hops was decidedly Mosaic.

Introduced to the potential of the Mosaic hop by Focal Banger, a beer brewed by The Alchemist in Vermont, Noah was excited to pilot a beer that would feature this expressive hop. On a small 5-gallon scale, the team formulated and brewed a Rye Pale Ale that would include Mosaic and Chinook hops, as well as a decent percentage of rye in the grist to cut the overtly tropical character of Mosaic.  This beer would potentially serve as a bookend to a beer that would become Swish, a easy drinking lower ABV Pale Ale to stand alongside a massive Double IPA.

That night at Mama’s, at our event, Bissell Brothers was debuting this pilot, a beer that we named Munjoi at the very last minute before the keg got delivered to the bar.  The beer had to be called something for the event, and we practically cringed writing that name onto the keg collar, but it was a spoof on the popular skateboard company Enjoi, and a nod to the bar’s location on Munjoy Hill. Despite it’s hazy appearance and lousy name, the beer was a smash hit at Mama’s. That single keg did not last all that long.

Today, Mama’s CrowBar no longer exists. Despite its contribution to the (even still then) burgeoning beer scene here in Portland and throughout Maine, the bar sadly closed its doors in September 2015.  The joint sold, and the new owners overhauled the place, re-opening it as a less beer-focused establishment, and certainly a place far less soulful than Mama’s. Mama’s CrowBar may no longer be Mama’s CrowBar, and Munjoi is not called Munjoi…. But from all that history there is a beer we call Lux.

Lux is still a Rye Pale Ale, and it is still a showcase of the Mosaic hop.

But it’s true that hops are an agricultural, seasonal ingredient, subject to slight variations from crop-year to crop-year, with many variables resulting in the ultimate characteristics of any particular bag of hops.  We’ve seen our Mosaic hops drift from what once was a pure vehicle for peach and blueberry to take on a danker quality, and it was this drift that led to slight recipe tweaks to Lux over time. We shifted the hop schedule to a duo pairing of Mosaic and Centennial, and then moved to the all-Mosaic recipe that’s in the beer today.  All the while, we’ve kept the rye (nearly 20% of the grist) component to provide a palpable spicy rye character to the beer.

Balanced with Vienna and Crystals malts, this new school version of a archetypal pale ale delivers ultimate drinkability, and the beer is a favorite of our staff and folks who work in the industry. At 5.1% ABV, it hits that sweet spot where multiple pints are the preferred serving size. Lux is a beer designed for drinking, it’s flavorful, complex, and nuanced, all while simultaneously remaining simple and approachable. It is a beer that you can satisfyingly drink everyday and not grow fatigued, or it is a beer you can revisit once every few weeks and be absolutely blown away. It’s simply delicious and we brew it as often as we can.

After the event at Mama’s CrowBar, we knew we wanted to brew this beer all-the-time on a bigger scale.  With several more months of tweaks on the pilot system, we we finally ready to brew the beer on the big system. It was the dead of winter, a particularly long haul through snow and wind and dark, cold, nights, but it was also a time when we finally we able to have access to more and more hops, and different varieties.  Being able to access and brew with hops like Mosaic was metaphorically the beginning of a golden age of hoppy beers for us—an allegorical light shining down, illuminating our ideas of what Pale Ales and IPAs could actually be. The name “Lux” ultimately captured this feeling…

The beer is punchy, tropical, hoppy, and when you sip it, it feels warm in a very real and visceral way. Bright and light, the beer illuminates the palate, and inspires relaxation and a slower pace of life. In that—and in many ways—Lux is an escape to a sunnier state of mind.

Enlighten your day with a can (or two) of Lux.

The Substance Ale
Nothing Gold