ONE YEAR ON MILO TIME 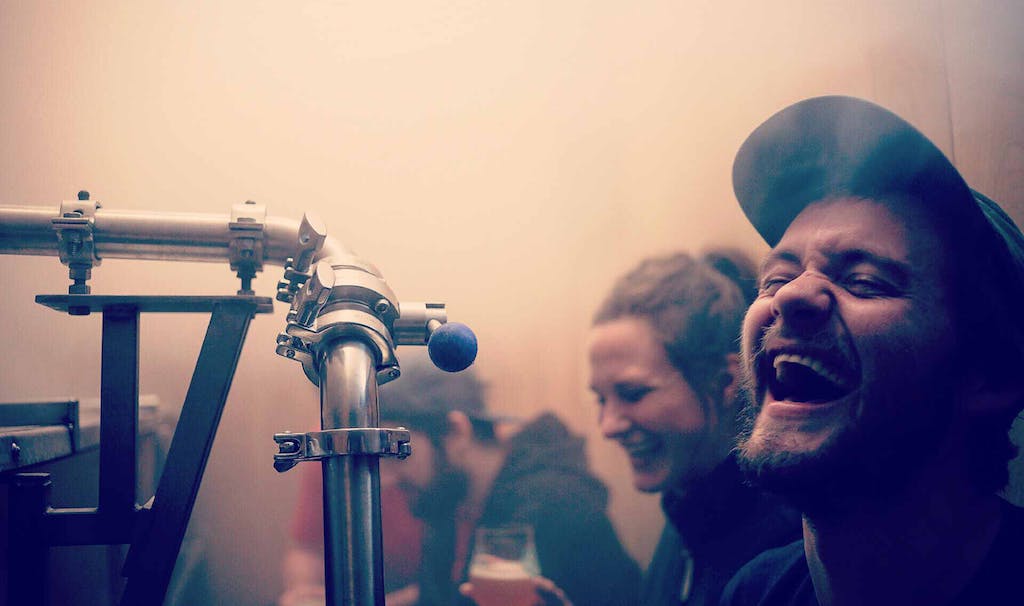 Milo, Maine is a 2.5 hour drive from Portland. Exactly one hundred and forty two miles. If you were given a map and asked to point directly to the center of the state of Maine, we bet your finger would land within 20 miles of Milo. Not exactly nowhere, but definitely the middle of a wide expanse of what is, to many, very unfamiliar territory.

When asked about what went into Bissell Brothers’ decision to open our second location in Milo, the reasons range from romantic to practical. It’s a well-worn fact that Peter and Noah grew up in Milo so, in that sense, an undeniable theme of homecoming runs through the Milo discussion. At the same time, the beers that we were looking to brew required something that Milo has in relative abundance: affordable space.

But we’re getting ahead of ourselves already. Let’s back up.

Being thrust into the beer world at large is a big part of the early days of starting a brewery. Not only are you working on getting your own business off the ground, but you are also suddenly invited to taste the best beers in the world, see where they are made, and meet the people who make them. In terms of future areas of growth, it was those travels that got the wheels turning for Pete and Noah, especially what they saw in Belgium.

At this point, the Portland brewery was up, operating, and thriving. As their interest and experimentation with Belgian style beers grew, so did the need for more space and the ability to isolate those beers.

“Cross contamination is probably the biggest thing that made it a functional choice to have them separate. We started playing with filling barrels here [in Portland], but because of the attempts at isolating everything, it was just a pain in the ass to do anything here.” says Noah. Clearly, we needed room to spread out.

This is where Milo’s abundance of space at low cost, at least compared to commercial real estate costs in Southern Maine, comes into play. Discussions of next steps happened more and more frequently, and soon the solution revealed itself after reflecting upon the hometown response to the brewery itself.

“Seeing over and over again how happy for us everyone was [back home] planted that seed of ‘well..someone will come’,” says Noah. It was that warm reception from their hometown that led to the final decision to open a second location there.

So with that, a building was purchased on Elm Street in Milo during the summer of 2017. This is where the education on wild beers truly began.

“To make these beers really well, time can’t really be on your mind. At least that’s been the philosophy so far,” says Noah, reflecting upon Bissell Brothers Three Rivers’ beginnings. “I felt like the best way to really learn about them was to put them in a place where that wasn’t an issue.”

Enter the concept of Milo Time. After so many years brewing IPA’s, which have a reliable turnaround time of about two weeks, brewing in Milo was a lesson in patience.

“It hurts the beer to be too watchful over it, because then you’ll get antsy about it and take samples too much, and to a degree it needs to be left alone,” says Noah. “But that can so easily slip the other way, where you just forget that it even exists and you miss this perfect window. But that’s the thing about these types of beers: it’s an ongoing learning process about knowing even what that window is.”

The reality of our Milo brewery has been both surprising and delightful. Over the past year, we have packaged 200 BBLs of Milo beer. We’ve made the space our own, learned lessons about patience and planning, and deeply familiarize ourselves with a town we might never have visited otherwise. We’ve gained friendships with and an understanding of the locals who make this place possible. We have seen how the two Bissell Brothers locations work synergistically together, each informing and inspiring the other in nuanced ways, intangible but still very much present.

One part utilitarian planning, one part rural simplicity, one part continuing education: in the middle of this Venn diagram is where the heart of Bissell Brothers Three Rivers truly lies. While it might not be the center of the universe, this brewery in a small town in the middle of Maine has taught us the value of slowing down, taking your time, and letting things get there on their own.

In honor of Bissell Brothers Three Rivers first anniversary, we have released an anniversary beer, simply titled “I”. This beer encapsulates many of the lessons we’ve learned this past year. Using beer from our second and third batches brewed in Milo, it was aged for over a year in wine barrels and an oak foeder, blended and then dry hopped with Citra, Mosaic, and Simcoe. Overall, a good way to show what we’ve learned so far, and where we are headed. And it doesn’t taste too shabby either.

Thank you all for your support. Come visit us today in Milo for our anniversary party, grab some bottles, and see what Milo Time is all about.

YOU EARNED IT: SESSION FIVE
Ask A Scientist: What Are Off Flavors?