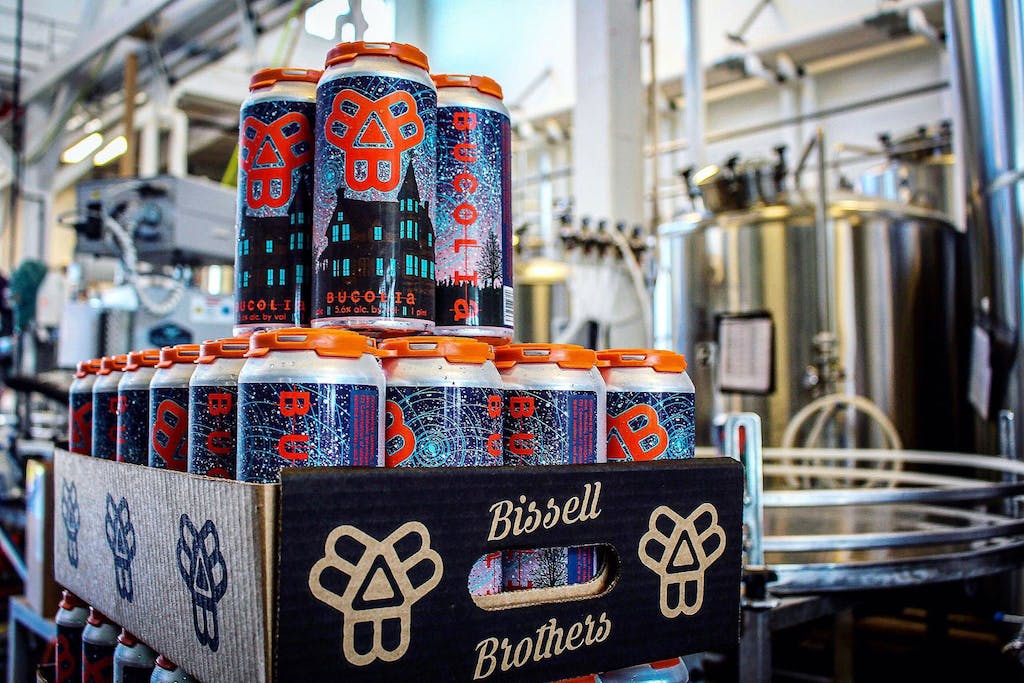 buc·ol·ia
/byo͞oˈkōliā/
noun
1. the state of being bucolic; 2. a reservoir of memories from Fall in New England; 3. an evolved Amber Ale

Take a moment to conjure up and imagine every cliché that you can think of about the season of Fall in New England. If you’ve ever spent an Autumn here in Maine, you know. No one is walking around the Old Port, and surely no one is out there in the woods on a hike in Baxter State Park, going around saying “man, fall freakin’ sucks.” Fall is pretty magical here. There is a reason those clichés are clichés.

There is something about experiencing Autumn in Maine, the perfect time of the year, that is, simply put, so special. Everything about it—the way the cool air feels against your skin, the smell of the outdoors that permeates every moment of being in it, the sound that dry leaves make underfoot when you’re walking in the light of a fading afternoon fading afternoon light. Or perhaps it is the cool kiss of the salty ocean on your face as you paddle out to catch some surf in the magical pre-dawn sunlight at Higgins Beach. Close your eyes in Fall, and you’re swept away in a sea of involuntary memories about past-times spent in the Northeast.

It was the Fall of 2014, with two beers solidly under our belts—having now brewed Substance and then Baby Genius routinely—we started to think about what beer would come next. That fall, our mind kept getting swept up with vivid memories, good and bad, of say, leaving home, heading to school on a Fall day. Memories of throwing the football around with your best buds. Racing your bike downhill with windswept, colored leaves trailing behind you. Those mercurial feelings of a perfect October afternoon. We decided we would brew something that would elicit those feelings, would embody and emulate those moments in the glass.

Inspired broadly by the dryly assertive malt character in our favorite European, old-world, Amber-beers, we set out to brew a beer in the vein of the Marzens and Biere de Gardes that we found so satisfying to drink. We would further draw more direct, albeit bookended, inspiration from two very different beers. First, Calico from Ballast Point, a soft, easy-drinking, dry Amber Ale. Calico was a delicious, simple yet complex, beer to drink. And second, Zoe, Maine Beer Company’s hoppy Amber Ale, first brewed in 2009. Zoe was unlike any beer we’d ever had at the time, so hoppy but possessing a defined roasty edge and that deep, red hue and luminance when poured in a glass.

With the goal of striking a balance, and with the idea to keep alcohol in moderation, we started with a base of Golden Promise. Providing a subtle, but still very present toastiness, Golden Promise provides the platform for Munich malt to contribute a biscuity, chewy, but not inherently sweet malt profile.  A touch of Dark Wheat Malt aids in head formation and retention.  A kiss of Pale Chocolate malt—a softer version of the standard roasted malt—added for a subtle additional layer of color and flavor.

Finally, to complete the grist, the recipe for Ballast Point’s Calico (a recipe that was gleaned from Can You Brew It?, one of our favorite shows on The Brewing Network) provided the impetus for adding a small percentage of Carastan into the beer. An English malt, contributing English toasty and caramel characters, this malt quickly became one of our favorite tools to provide balance in maltier, hoppier beers. Not yielding a burnt fruit character, restrained complexity. Carastan rounds out a beer that we would want to drink on that perfect New England October afternoon.

Although it is definitively not an IPA, we do add our own thumbprint to Bucolia with hops. Simcoe seemed ideal, imparting a brightly fruity, sweet juicy character, with the distinct character of pine that can evoke the scents of an Autumn day. The beer is delicately balanced with both Centennial and Chinook hop additions. It’s a hoppy beer, for sure, but the hops don’t steamroll the malt profile that we’ve so thoughtfully crafted, the entire time with Fall in Maine in mind. And every bit as delicious to drink…

Whenever you sip Bucolia—spring, summer, winter, or fall—we hope that you, too, experience the sensation of a bucolic New England autumnal day. Maybe you are with your friends, sitting around a campfire, wearing your favorite pair of jeans, worn-in just right, and your most comforting flannel shirt. Your crew altogether, cans of Bucolia in hand, laughter and smiles peeking through the flames, celebrating fall in Maine. Sound cliché? Sure is.