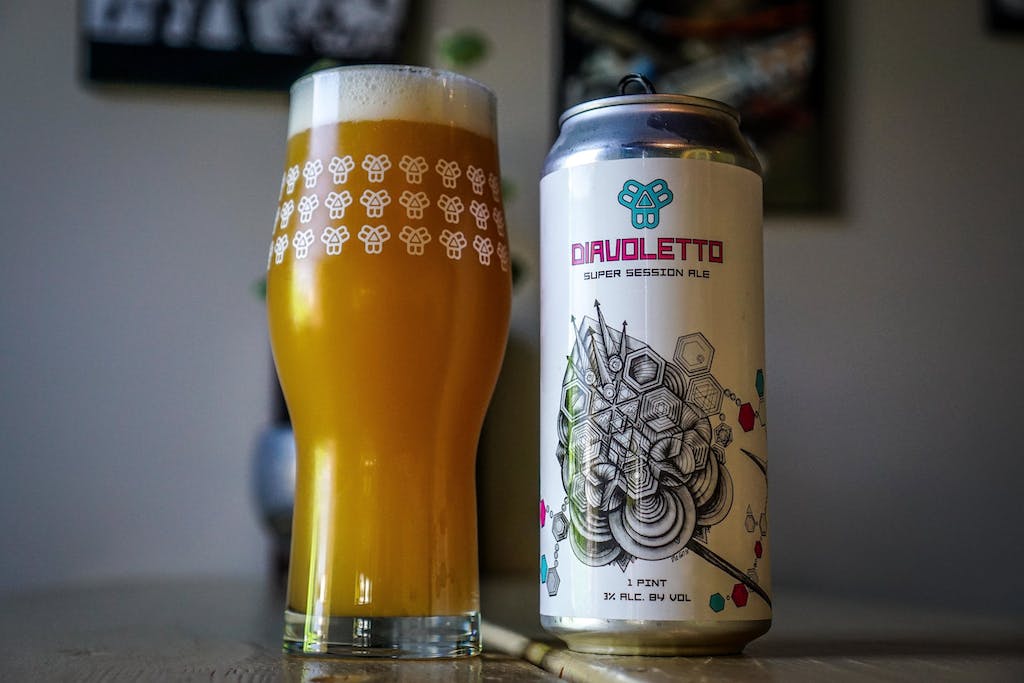 Flashback to high school, and a young Noah was eagerly looking forward to a class trip abroad, a visit to the Iberian Peninsula and the country of Spain. The trip was a worldly, cultured experience for Noah at the time, traveling the globe and engaging upon new experiences. There in Spain, where the legal drinking age is sixteen, the students did what almost any American teenagers would do, and that is, buy two cases of the first macro Spanish beer that they could find. After slugging down can after can of a beverage that tasted truly terrible to these kids who were utterly inexperienced with art of drinking beer, Noah and his classmates made a sad, telling discovery—purchased in reckless haste, these particular cans of beer were non-alcoholic. Printed clearly on the package: Alc. 0.0% Vol.

Flash forward years later, and a slightly older Noah had uncovered a different, but similarly lower-alcohol offering from Spain—Guineu Riner, a 2.5% ABV American-style Pale Ale from Cervesa Guineu. Unlike the non-alcoholic macros that Noah had eagerly gulped down on that class trip years earlier, this Spanish beer was delicious, drinkable, and fulfilling.

At that time, golf was one of Noah’s favorite diversions from work and life at the brewery, and although the fact that the golf course and adult beverages can go oh-so-well together, there’s a fine line between total enjoyment and too much consumption. Sick and tired of chasing golf balls into the woods, Noah wanted a low alcohol offering he could drink on the course. A beer that was still full-flavored, but wouldn’t have him repeatedly slicing his ball out-of-bounds.

And around this same time, James Krams, then a bartender at the Thirsty Pig, turned Noah onto another low-ABV, full flavored beer, Bikini Beer from Evil Twin. Clocking in at 2.7% ABV and packaged in sixteen-ounce cans, Bikini Beer was (and is) simply awesome for what it is. Noah and James were regulars together at the local links, and one day out on the course, James handed Noah a can of Bikini Beer as they turned the second hole. Cracking that low-ABV beer and taking a sip before teeing off on the next hole, everything clicked for Noah. Game changer.

Ever since that discovery, Noah had been inspired and intrigued by all aspects of the challenge of brewing an inherently light beer (in ABV and impact), but an American hop-forward beer (not light in flavor). If you aren’t always (or aren’t often, for that matter) drinking beer to get drunk, less ABV really is more!

Our version of a beer inspired by Guineu Riner and Bikini Beer would be originally brewed as a pilot batch for Slab, brewed during our first summer of operation. We’d ultimately name this beer Diavoletto, taking Italian-inspiration from the fare served at Slab, but also referencing what would be the beer’s low ABV. Little Devil; Imp (plus, fittingly, as is our inclination, we always use the word “imp” whenever appropriate, it’s simply a good word).

Brewing a beer with such a low ABV requires a great deal of fastidiousness, attention to every detail. The goal is a healthy and fully complete fermentation, but with a very low attenuation. Without relying on lactose or other scientific tricks to “freeze” fermentation, there is a heightened risk for off-flavors to show their colors with such different fermentation.

In the brewhouse, this means employing an extremely thin mash, that is, a higher ratio of water to pounds of grain going into the mash tun. A thin mash allows the vast majority of the wort to be collected as “first runnings”—that means before any sparge water is added to rinse the additional sugars from the grain bed. Although this provides us the better ability to control the unstable pH and the excessive tannin extraction that low-gravity brewing is particularly susceptible to, it doesn’t come without difficulties. Such a higher water-to-grain ration makes fostering and maintaining a flat, even layer of grist in the mash tun quite challenging. And that uniformity is another particularly important facet of ensuring that we achieve exactly the type of delicate wort composition that we are striving for.

In addition, brewing a hyper-drinkable, hyper-flavorful beer without the impact of a bigger beer requires an equally deft hand in recipe formulation. For the grist, we start with a base of Golden Promise, imparting a full and pleasantly sweet, malty character. We use Carahell, an extremely light German crystal malt, to impart just a touch of color, but more so to provide some flavors and unfermentable sugars that would be present with the use of a more traditional, darker crystal malt. Use of an equal amount of a malt like Carastan, however, would be cloying in this delicately balanced beer. We can use a higher percentage of Carahell, on the other hand, because it is lighter and more restrained. Finally, we round out the grist with Munich malt for some bready, chewy nuance, as well as flaked wheat and flaked oats for body and mouthfeel.

For hops, we chose Lemondrop, a hop varietal that we were excited about, with a subtle citrusy character, and low in alpha acids—great for application in a nuanced and low gravity beer. The lower alpha acid content allows us to use more of the hop, imparting more of that pleasantly grassy, unique citrus character, yet extracting less bitterness. We ramp up the American-hop character with healthy additions of Citra and Mosaic, both in the kettle and in the dry-hop. The big, bold tropical notes of Citra and Mosaic are tempered by the use of Lemondrop, providing depth and not overwhelming the balanced, definitively American hop profile to the beer.

And, the next time you are on the links swinging the golf clubs with your buds, bring a four-pack of Diavoletto, enjoy some cans out on the course. But better dream up some fresh excuses, this time you won’t be able to blame your slice on the beers.